NASHVILLE, Tenn. (AP) — A former Tennessee nurse is guilty of criminally negligent homicide in the death of a patient who was accidentally given the wrong medication, a jury found Friday. She was also found guilty of gross neglect of an impaired adult.

RaDonda Vaught, 37, injected the paralyzing drug vecuronium into 75-year-old Charlene Murphey instead of the sedative Versed on Dec. 26, 2017. Vaught freely admitted to making several errors with the medication that day, but her defense attorney argued the nurse was not acting outside of the norm and systemic problems at Vanderbilt University Medical Center were at least partly to blame for the error.

The jury found Vaught not guilty of reckless homicide. Criminally neglent homicide was a lesser charge included under the original charge.

Murphey had been admitted to the neurological intensive care unit on Dec. 24, 2017, after suffering from a brain bleed. Two days later, doctors trying to determine the cause of the bleed ordered a PET scan to check for cancer. Murphey was claustrophobic and was prescribed Versed for her anxiety, according to testimony. When Vaught could not find Versed in an automatic drug dispensing cabinet, she used an override and accidentally grabbed vecuronium instead.

An expert witness for the state argued that Vaught violated the standard of care expected of nurses. In addition to grabbing the wrong medicine, she failed to read the name of the drug, did not notice a red warning on the top of the medication, and did not stay with the patient to check for an adverse reaction, said nurse legal consultant Donna Jones. 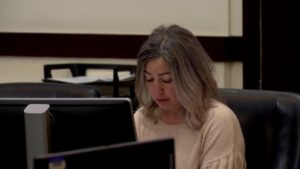 Leanna Craft, a nurse educator at the neuro-ICU unit where Vaught worked, testified that it was common for nurses at that time to override the system in order to get drugs. The hospital had recently updated an electronic records system, which led to delays in retrieving medications from the automatic drug dispensing cabinets. There was also no scanner in the imaging area for Vaught to scan the medication against the patient’s ID bracelet.

In closing arguments, defense attorney Peter Strianse questioned whether prosecutors had proven, beyond a reasonable doubt, that the vecuronium injection caused Murphey’s death. Strianse pointed out that the original death certificate identified intracerebral hemorrhage and cardiac arrest as the cause of death. Only a year later was a new death certificate issued identifying vecuronium intoxication as the cause, and it was issued without an autopsy.

Prosecutors argued that the timing of Murphey’s decline and her symptoms both pointed to the paralyzing injection stopping her breathing. They noted that the doctor who wrote the original death certificate testified that he now believes vecuronium caused Murphey’s death.