DOVER, Del. (AP) — An administrator at a Delaware prep school whose graduates include U.S. Sen. Chris Coons and television personality Dr. Oz has been charged with dealing child pornography. 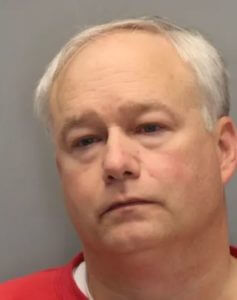 Ushler, director of upper school admissions at Tower Hill, is charged with five counts of dealing in child pornography, according to the Delaware Department of Justice. He is currently in custody, with cash bail set at $250,000. It was not immediately clear whether he has a lawyer.

Tower Hill officials said in an email Wednesday to the school community that Ushler has been fired and barred from campus.

“We were advised that law enforcement authorities know the source of the images in question, and these images do not depict Tower Hill students or children who were in contact with Mr. Ushler,” the email stated.

According to a search warrant affidavit, the Delaware Child Predator Task Force received a cyber tipline report from the National Center for Missing and Exploited Children on April 14. The report was initiated by Yahoo! Inc. and indicated that one of its email users had transmitted files possibly containing child pornography.

The emails identified in the report included two sent March 21 showing a nude female who appeared to be 14 or 15 years old. Another email, sent on Aug. 10, 2019, showed an inappropriate image of a young teenage girl. Three more images of nude girls were found stored on Ushler’s iPhone, according to investigators.

According to the affidavit, Ushler told investigators after being read his Miranda rights that Yahoo! had suspended his email account about a month ago, and that he had engaged in online chats with people who would send him images of naked females. Ushler also admitted he had sent similar images, including those depicting minors.

The search warrant affidavit indicates the IP addresses used by Ushler to access his Yahoo! email included one registered to Tower Hill. School officials said they have begun an audit of their technology systems to determine whether any safeguards were compromised. They also acknowledged that Ushler’s arrest “may have reverberations and echoes” of a similar scandal involving former headmaster Christopher Wheeler.

The Delaware Supreme Court overturned the convictions the following year, ruling the search warrants obtained by police investigating Wheeler were unconstitutionally broad. Wheeler’s attorney had argued that authorities improperly used possible witness tampering as an excuse to obtain warrants allowing them to search his computers, cellphones and other digital devices.

Wheeler was arrested after police, prompted by allegations of sexual abuse for which he was never charged, searched his home and office.

Authorities purportedly were looking for evidence of Wheeler’s communications with Pennsylvania brothers who, in the wake of the Jerry Sandusky scandal at Penn State University, contacted Wheeler about their alleged molestation several decades ago. In reply to a letter from one of the brothers, Wheeler apologized for the pain he had caused, saying, “I did those things.”

Wheeler’s attorney argued that nothing in his correspondence or meetings with the brothers suggested, and no allegation was ever made, that he had tried to intimidate them or prevent them from reporting the alleged abuse to authorities.

Wheeler’s attorney and the American Civil Liberties Union, which filed its own brief in the case, also noted that the computer containing child pornography images for which Wheeler was convicted had last been turned on 10 months before the Pennsylvania brothers began communicating with him in July 2013. The defense attorney also argued that prosecutors never proved Wheeler ever downloaded or looked at any images of child pornography, which he said were automatically cached to Wheeler’s computer from newsgroups to which he had subscribed.