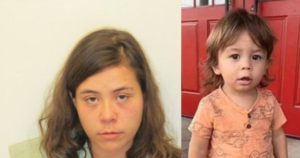 Simon, who police say is the sole suspect in the case, initially reported the boy missing from their home near Savannah, Georgia on October 5.

Quinton was presumed dead by police on October 12, although the search for the little boy would continue. Simon, 22, was named a suspect that same day.

Simon was not arrested, however, until this past Monday, when the Chatham County Police Department announced the mother was taken into custody on charges of malice murder, concealing the death of another person, false reporting and making false statements.

Law enforcement personnel have spent the past month sifting through over a million pounds of garbage in a Chatham County landfill. Last Friday, human remains of a child were found in that landfill.

WATCH: Quinton Simon’s Grandmother: I Turned My Daughter in to the FBI

Authorities believe the remains are Quinton’s, but are working to positively identify him. The remains were sent to the lab at FBI headquarters in Quantico, Virginia, where DNA testing is taking place.