SAVANNAH, Ga. (AP) — The search for a missing Georgia toddler presumed dead by police shifted Tuesday to a landfill outside Savannah where investigators planned to start sifting through trash for the child’s remains.

Chatham County Police Chief Jeff Hadley said investigators had evidence that prompted the landfill search for the body of 20-month-old Quinton Simon, but he declined to say what it was. 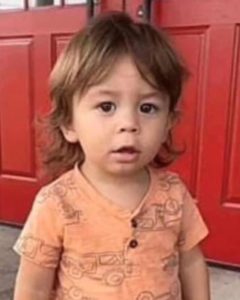 “We believe that he was placed in a specific dumpster at a specific location and it was brought here by regular means of disposal,” Hadley said during a news conference. “I have every belief that we will find his remains here at the landfill.”

Police began searching for Quinton on Oct. 5 when his mother called 911 and said the boy had gone missing from his playpen. After more than a week spent searching the house and surrounding neighborhood, Hadley announced Thursday that police believe the child is dead.

He also named the boy’s mother, Leilani Simon, as the a suspect in her son’s death and disappearance. Nearly a week later, she has not been arrested or charged.

Hadley said his department and the FBI spent days planning and getting personnel and equipment in place to search the landfill.

“We want justice for Quinton just like everybody else,” the police chief said, “and we want to find his remains so we can give him a proper resting place.”

Dozens of FBI agents were on hand to assist police officers, said Will Clarke, supervisory agent for the bureau’s satellite office in Savannah.

Clarke said investigators were focusing their search on a specific area of the landfill, where debris would be deposited on a designated search deck for authorities to comb through one pile at a time.

Leilani Simon had no listed phone number and it was not known Tuesday if she had a lawyer who could speak on her behalf. Court records showed she represented herself in two civil cases filed since March involving her custody of her children and child support.

Police reports and court documents show there was turmoil in recent weeks between the child’s mother and grandmother, Billie Jo Howell, who had legal custody of him and an older sibling. Quinton, his mother and his mother’s boyfriend lived with Howell.

Simon called police on Sept. 7 following an argument with her mother over laundry in which she said Howell had shoved her against a wall, according to a police report. No one was charged and an officer found no injuries other than Simon’s reddened elbow. 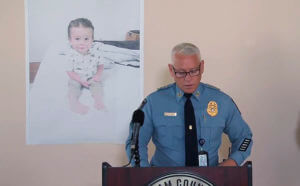 Chatham County Police Chief Jeff Hadley speaks to reporters as he stands in front of a large photo of missing toddler Quinton Simon at a police operations center being used in the search for the boy’s remains just outside Savannah, Ga., Tuesday, Oct. 18, 2022. Quinton was reported missing from his home Oct. 5, 2022, by his mother. (WSAV-TV via AP)

The following day, Quinton’s grandmother filed papers in Chatham County Magistrate Court to have Simon and her boyfriend evicted from her home, WTOC-TV reported.

A few weeks later, on Sept. 28, a Superior Court judge ordered Leilani Simon to pay $150 per month in child support.

“We’re not ready to charge anyone yet,” Hadley said Tuesday when asked why no arrests had been made. “We still have work to do. We still have an investigation to do. We’re not going to do anything preemptively that would harm a future prosecution.”