DALLAS (AP) — One of the 18 older women a man is charged with killing in the Dallas area over a two-year span ran a restaurant in Vietnam before leaving on a helicopter as Saigon fell and was a generous person who loved giving people $2 bills, her son-in-law testified Tuesday.

“My mother-in-law was a hoot. She was very fun to be around,” Richard Rinehart said. 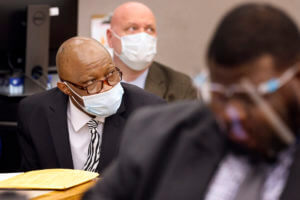 Billy Chemirmir is on trial for capital murder in the death of Rinehart’s mother-in-law, 81-year-old Lu Thi Harris. Chemirmir faces life in prison without parole if convicted. Prosecutors decided not to seek the death penalty.

Chemirmir was arrested in March 2018 after 91-year-old Mary Annis Bartel survived an attack at her apartment at an independent living community for seniors in Plano. She died in 2020.

Jurors listened Monday as Bartel said in a taped deposition that she knew she was in “grave danger” as she opened her door to a man wearing green rubber gloves. Bartel described a pillow being smashed into her face and her attacker “using all his weight to keep me from breathing.”

When police tracked Chemirmir to his nearby apartment the next day, he was holding jewelry and cash. Documents in a large red jewelry box police say he had just thrown away led them to a Dallas home, where Harris was dead in her bedroom, lipstick smeared on her pillow.

Prosecutor Glen Fitzmartin has said that earlier that day, Harris and Chemirmir had been checking out at the same time at a Walmart store.

Rinehart testified on Tuesday said that the jewelry box found in the trash belonged to his mother-in-law, as did numerous pieces of jewelry that officers found as they arrested Chemirmir.

Evidence presented Monday showed that Chemirmir was also in possession of numerous $2 bills at the time. Rinehart testified Tuesday that his mother-in-law loved giving them as gifts.

Police have also said that a set of keys found with Chemirmir when he was arrested opened the front doors of Harris’ home.

Rinehart said that Harris, who he called Kim, was born on a Chinese island. When she was a young girl, prior to World War II, her family moved to what is now Vietnam. He said she grew up in Saigon, which is now Ho Chi Minh City, and eventually owned a restaurant and bar there.

The restaurant was located across the street from an oil company where the man who became her second husband, William Harris, worked.

“When the demise of Saigon was imminent, she had already married Mr. Harris and he was called out to Hong Kong by his company but he had arranged paperwork for her and she actually got out of Saigon on a helicopter on the American Embassy to an aircraft carrier on the South China Sea,” Rinehart said.

Rinehart said that after leaving Vietnam, the couple lived in Tanzania before William Harris retired and they moved to Dallas. William Harris died in 2008.

Rinehart said his wife, Loan Rinehart, died of cancer in 2013. He said one of Lu Thi Harris’ sons still runs her restaurant in Vietnam.

Following Chemirmir’s arrest, authorities announced they would review hundreds of deaths, signaling the possibility that a serial killer had been stalking older people. Over the following years, the number of people Chemirmir was accused of killing grew.

Fitzmartin said jurors would also be hearing about the killing of 87-year-old Mary Brooks, who was found dead in her Richardson home in January 2018. Chemirmir has been charged in her death.

He said that Brooks’ death had originally been called a natural death, but after an investigation following the arrest of Chemirmir, the medical examiner changed the cause of death to homicide.

Fitzmartin said that the day before Brooks was found dead, she was at a Walmart, the same Walmart that Harris was at before her death later in the year. Fitzmartin said that a vehicle model known to be driven by Chemirmir was parked next to Brooks’ vehicle.

On Tuesday, the medical examiner who performed Harris’ autopsy testified that while she had small broken blood vessels and some bruising, he had to rely on investigative information to determine the cause of death.

Travis Danielsen, who worked for the Dallas County medical examiner’s at the time of Harris’ death, said he determined her cause of death to be smothering and manner of death to be homicide.
He said that without information from the investigation, the death would have been ruled undetermined or natural.

“In asphyxial deaths, as a medical examiner, we rely most heavily, I believe, on the investigative information,” he said.

The defense did not make an opening statement. Chemirmir’s attorney has called the evidence against Chemirmir circumstantial.