The seemingly senseless stabbing of a young girl by two of her school friends in the Waukesha, Wisconsin, woods in 2014 made international headlines when it became known that the two perpetrators were under the sway of Slenderman, a fictional Internet demon that they had become convinced was real.

But the lurid headlines of the stranger-than-fiction crime missed many crucial facts about the case, which author Kathleen Hale lays out in rigorous step-by-step detail that’s the result of seven years of research. For one, the girl that they stabbed survived, although her injuries were severe and her recovery long. 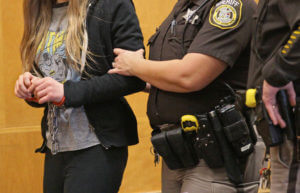 One of the two 12-year-old defendants is led into the courtroom in Waukesha, Wis. on Thursday, Dec. 18, 2014 during the trial for the stabbing of a third girl in May 2014. The two girls told detectives the attack was an attempt to please Slenderman, a fictional character they found on a horror website. (AP Photo/Milwaukee Journal-Sentinel, Michael Sears, Pool)

Morgan Geyser and Anissa Weier, who were 12 when they committed the crime, found Slenderman online on a website called Creepypasta.com, a fan-fiction site that combined amateur horror stories with altered photos and videos. Slenderman struck a chord with the two girls, and they became convinced they had to commit a human sacrifice and then find Slenderman in the woods to live with them. They chose their friend, Bella, for the attack.

Geyser had undiagnosed childhood schizophrenia and had seen colors and visions her whole life, so believing in Slenderman fit in with how she knew the world. Weier had a difficult home life and found an escape in Creepypasta and going along with Geyser’s visions. Together, they became absorbed in a shared delusion, known as a folie à deux, leading to tragic consequences. 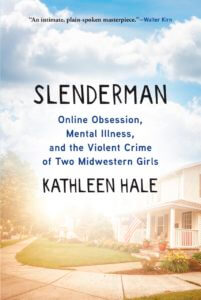 The two were caught soon after the stabbing, and quickly confessed their crime to baffled police. They wound their way for years through the legal system in Wisconsin. Eventually, they were both found not guilty by reason of mental disease or defect, and sentenced to lengthy terms at the Winnebago Mental Health Institute in Wisconsin.

Hale’s compassionate look at the case is a compelling, yet harrowing read that reveals how a seemingly innocent childhood friendship could lead to such a devastating outcome.