NOBLESVILLE, Ind. (WRTV) — A judge on Wednesday sentenced suspended Indianapolis priest David Marcotte to a year on home detention under a plea agreement that ends his trial on allegations he sexually abused a teenage boy six years ago.

During a hearing in Hamilton Superior Court, Judge Jonathan M. Brown addressed the teary-eyed parents of the victim as he accepted a plea agreement they both begged him to reject. 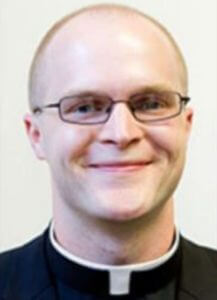 “Your son deserves some closure so he can put this behind him,” Brown said, addressing the young man’s mother and father sitting in the gallery of his court room. “The last thing your son wants is for him to be found not guilty then walk.”

The victim, now 20, lives in another state and is attending college. In a letter to the court, the young man called Marcotte “the bald-headed pedophile creep in the defendant’s chair.”

“I saw you baptizing babies, marrying young couples, giving communion to every mouth in the church,” the victim said in the letter. “Yet the whole time, you just wanted to see me, if not other boys, without clothes on.”

Marcotte pleaded guilty last month to one count of dissemination of matter harmful to minors and admitted he shared lewd images with a boy who was 14 or 15 at the time. Prosecutors, in turn, agreed to dismiss child solicitation and vicarious sexual gratification charges.

Judge Brown handed Marcotte, 35, the maximum punishment allowed under the agreement. After he serves the year of home detention, Marcotte must serve another 18-months on probation. The judge also suspended a 2-and-a-half-year prison sentence.

The deal means Marcotte avoids prison and doesn’t have to register as a sex offender.

Standing at the defendant’s table, Marcotte apologized to the young man and his family in court and promised to prove every day by his actions that he was truly sorry for what he’s done.

“It is my intent to show this court that I mean what I say,” Marcotte said as the victim’s parents looked on in silence.

“This entire legal experience has been all the dis-illusionment a child (and) young man could ever ask for,” the victim said in his letter. “Reliving this experience through the lens of Indiana and Hamilton County law has been salt to an unstitched wound.”

Marcotte worked at St. Malachy Church and School in Brownsburg when he allegedly sent inappropriate images and engaged in sexual conduct with the boy via social media and video chat apps. 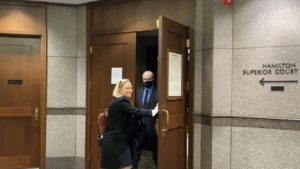 Marcotte, ordained in 2014, was suspended on Feb. 12, 2019, just six days after the Archdiocese of Indianapolis said it had learned of the allegations.

A spokesman for the archdiocese said Wednesday that Marcotte remains suspended from the ministry. The archdiocese spokesman declined to say whether Marcotte would have an opportunity to be reinstated to the priesthood.

Marcotte also served at St. Martin of Tours Parish in Martinsville; the University of Indianapolis; Roncalli High School in Indianapolis; and at SS Francis and Clare Parish in Greenwood.

The victim in his letter told the court he’s haunted by the abuse he suffered. He said he’s working through it all and today said he is talented, thick-skinned and strong.

“Molesting me was the worst mistake you’ve ever made,” the young man said. “If there even is a God, he abandoned you a long time ago.”

Survivors Network of those Abused by Priests, also known as SNAP, issued the following statement Thursday in response to Fr. Marcotte’s sentencing.

David Marcotte, an Indianapolis Catholic priest who was suspended in February 2019 amid allegations of sexual abuse involving a minor, agreed to plead guilty to one charge filed against him in March 2022. Marcotte, 32, pleaded guilty to one count of dissemination of matter harmful to minors, a level 6 felony, according to the Hamilton Superior Court plea agreement.

A judge sentenced suspended Indianapolis priest David Marcotte to a year in home detention on Wednesday, November 9, 2022, as part of a plea agreement that concludes his trial on allegations of sexual abuse of a teenage boy six years ago. Judge Jonathan M. Brown addressed the victim’s distraught parents during a hearing in Hamilton Superior Court as he accepted a plea agreement, which they both implored him to reject.

We first want to applaud and acknowledge the brave victim and his family in this case. It takes a lot of strength and courage to come forward, especially at a young age. We echo the sentiments of the victim’s impact statement which in part said, ‘This entire legal experience has been all the disillusionment a child (and) young man could ever ask for,” the victim said in his letter. “Reliving this experience through the lens of Indiana and Hamilton County law has been salt to an unstitched wound.” We cannot help but feel that charges of this magnitude deserved a much stronger sentence and less from the mouth of a predator. We too feel this is a miscarriage of justice.

According to the plea deal, Marcotte must serve another 18 months on probation after completing his year of home detention. A two-and-a-half-year prison sentence was also suspended by the judge. Marcotte avoids prison and does not have to register as a sex offender because of the agreement.

According to a spokesman for the archdiocese, Marcotte is still suspended from the ministry. The archdiocese’s spokesman declined to comment on whether Marcotte would be allowed to return to the priesthood. It is astonishing to us that church officials would even entertain employment as a priest for Marcotte. Letting the wolf back into the pasture would lead to another tragedy.

This case is yet another example that Catholic officials, who insist that the sexual abuse scandal is ‘in the past,’ are simply wrong. Marcotte was only ordained in 2014 and is still very young. We find it hard to believe that prayers, penance, home detention, and a few visits from probation will stop his criminal compulsions.

Across the country, an average of two clerics are charged each month with crimes against children or targeted adults. We urge Catholic officials in the Archdiocese of Indianapolis to begin the process of removing this offender from the clerical state, which would be taking initiative and showing some responsibility for employing this perpetrator. We also feel that church officials have an obligation to share where Marcotte will be living during his home detention and if the Diocese will be responsible for his expenses during this time. Moral responsibility demands nothing less.

This story was originally published Nov. 9, 2022 by WRTV in Indianapolis, an E.W. Scripps Company.