It’s been 10 years since Jodi Arias was tried and convicted for the heinous murder of her ex-boyfriend, Travis Alexander. 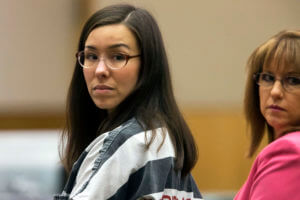 FILE – In this April 13, 2015, file photo, Jodi Arias, left, looks on next to her attorney, Jennifer Willmott, during her sentencing in Maricopa County Superior Court in Phoenix.  (Mark Henle/The Arizona Republic via AP, Pool, File)

The body of 30-year-old Alexander was found in the shower of his Mesa, Arizona, home in June 2008. His body had multiple stab wounds, a slit throat and a gunshot wound to the head.

At trial, Arias claimed her actions were in self-defense. She testified for 18 days, hurling accusations of physical and mental abuse she said she suffered at the hands of her lover. The prosecution argued Arias killed Alexander because she was jealous he was dating other women.

The salacious case triggered a media circus, which Arias’ attorneys used as a peg to appeal her conviction in 2019, along with accusations of misconduct by prosecutor Juan Martinez. That bid ultimately failed and the Arizona Court of Appeals upheld her conviction and sentence of life in prison. Martinez was eventually disbarred as the result of an unrelated investigation in which he was accused of sexual harassment and retaliation.

On Jan. 2, 2013, then-Maricopa County prosecutor Juan Martinez started the trial of Jodi Arias with a shocking opening statement. Martinez showed the courtroom graphic crime scene photos of Alexander’s body & nude photos of Arias that were reportedly taken by Alexander the day he died.

During the cross-examination of Lisa Daidone, Travis Alexander’s ex-girlfriend, Martinez tossed up a morgue photo of Alexander’s body. The action brought the witness & Alexander’s family to tears. Defendant Jodi Arias also had a visible reaction.

Under direct-examination, Arias gave detailed testimony on her sexual relationship with Alexander. Jurors heard an hour-long phone conversation between Arias and Alexander recorded weeks before the murder, in which they describe their sexual encounters and participate in phone sex.

JODI ARIAS DESCRIBES THE DAY OF THE KILLING

On the last day of direct examination, Jodi Arias said there were tons of “gaps” in her memory from the day she killed Alexander. She testified how she “pissed off” Alexander by dropping his camera and he allegedly said, “I’m going to kill you, b****.”

PROSECUTOR ACCUSES PSYCHOLGOIST OF HAVING FEELINGS FOR ARIAS

Prosecutor Juan Martinez accused psychologist Dr. Richard Samuels of having feelings for the defendant after he gave a book to Arias following their first meeting on Dec. 16, 2009.

Four months after the trial opened, a jury found Jodi Arias guilty of first-degree murder on May 8, 2013.