SAN DIEGO (SCRIPPS) — It’s a mother’s desperate plea to find the person responsible for killing her daughter, 40 years ago.

Cold case detectives are no closer to finding Michelle Louise Wyatt’s killer today than they were in 1980. But family and friends of Wyatt want to bring her story back into the limelight, with the hopes of finally getting a break in the case.

“‘Honey, I love you…’ Those were the last words I said to her,” Mrs. Wyatt said.

You can feel the pain of a parent who outlived her child — the pain of not knowing why she died, or who killed her, 40 long years ago.

On October 9, 1980, San Diego County Sheriffs investigators taped up a murder scene on Kerrigan Court in Santee. A roommate discovered 20-year-old Michelle Wyatt, lying in her living room. She had been raped, then killed.

Friends and family described Wyatt as an avid scuba diver, tap dancer, a beautiful young model, who was always so full of life. But suddenly, she was lifeless. Childhood friend, Sue Sorrells remembers the moment that changed her life.

“It was the single most horrible thing,” Sorrells cried.

Detectives searched for clues, followed leads, but never named any suspects. The Wyatt family even consulted a psychic, a Cherokee Medicine Man, and spoke to KGTV, just months after the murder, pleading for answers.

“I would like to get the reward going,” Mrs. Wyatt told KGTV in 1980. “Maybe it’ll bring the killer in. Maybe it’ll save someone else’s life if that killer is caught.”

But for 40 years, the killer has not paid for what they have done, and the Wyatts still have no answers.

This February, Michelle Wyatt would have been 61 years old. But for her mother, time has frozen.

“She is forever 20,” Mrs. Wyatt said. “She will never have a grandchild for me. She will never be able to get married. All these things she misses out on.”

Mrs. Wyatt says time does not heal all wounds. Every anniversary, birthday, and holiday triggers sorrow and desperation.

“It’s great for me to look through and see pictures of my daughter, but it’s very, very sad,” Mrs. Wyatt said. “Because she isn’t here.”

So once again, four decades later, she is opening up to KGTV.

“I just keep hoping that someone will come forward and tell me, ‘Mrs. Wyatt, I can help you,'” Mrs. Wyatt said. “That’s what I’m hoping for. Someone would just come over and just say that…”

Perhaps a new set of eyes and new DNA science will pinpoint the killer. 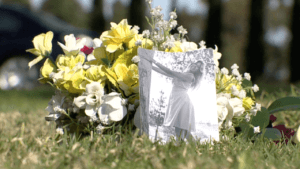 “We are looking at different options, so hopefully we will have a breakthrough using those new technologies,” Sgt. Michalke said.

Or better yet, persuade the killer to finally come forward.

“If we’re going to do it, let’s do it now. Let’s get this thing solved,” Sorrells said.

So for the first time in 40 years, Mrs. Wyatt can finally know the truth about what happened to the young woman she visits every Sunday.

If anyone remembers anything about Michelle Wyatt or her case, they are urged to call the San Diego County Sheriff’s Department’s Homicide Unit at 858-974-2321. They can also leave an anonymous tip at the Crime Stoppers at 888-580-8477. Tips leading to an arrest may be eligible for a $1,000 reward.

This story was originally published February 8, 2020, by Rina Nakano of KGTV in San Diego, California.