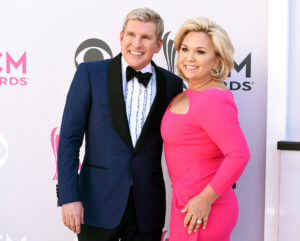 FILE – Todd Chrisley, left, and his wife, Julie Chrisley, pose for photos at the 52nd annual Academy of Country Music Awards on April 2, 2017, in Las Vegas. The couple, stars of the reality television show “Chrisley Knows Best,” have been found guilty in Atlanta on federal charges including bank fraud and tax evasion Tuesday, June 7, 2022. (Photo by Jordan Strauss/Invision/AP, File)

The Chrisleys were initially indicted in August 2019 and a new indictment was filed in February of this year. Their trial began three weeks ago, and a jury on Tuesday found them guilty of conspiring to defraud community banks out of more than $30 million in fraudulent loans, according to the office of U.S. Attorney Ryan Buchanan in Atlanta. They were also found guilty of conspiring to defraud the IRS and tax evasion, and Julie Chrisley was convicted of wire fraud and obstruction of justice.

Bruce Morris, an attorney for Todd Chrisley, said he was disappointed with the verdict and expects to appeal.

Prosecutors alleged that the Chrisleys submitted fake documents to banks when applying for loans. They said Julie Chrisley also submitted a false credit report and fake bank statements when trying to rent a house in California.

They used a company they controlled to hide income to keep the IRS from collecting unpaid taxes owed by Todd Chrisley, prosecutors said.

After they were found guilty, U.S. District Judge Eleanor Ross allowed the Chrisleys to remain free on bond. But she placed them on location monitoring and home detention, meaning they can only leave the house for certain reasons, including work, medical appointments and court appearances. They also have to alert their probation officers to any spending over $1,000, according to the order entered Tuesday.

Peter Tarantino, an accountant hired by the couple, was found guilty of conspiracy to defraud the United States and willfully filing false tax returns, the U.S. attorney’s office in Atlanta said. He also remains free on bond.

Sentencing for all three is set for Oct. 6.

“Chrisley Knows Best” follows the tight-knit, boisterous Chrisley family. The series was just renewed by USA for a 10th season, while spinoff “Growing Up Chrisley,” featuring Chrisley kids Chase and Savannah living in Los Angeles, was just renewed by E! for a fourth season.

The trial began in mid-May, just days after E! announced that it was moving forward with a new dating series, “Love Limo,” hosted by Todd Chrisley.

“As today’s outcome shows, when you lie, cheat and steal, justice is blind as to your fame, your fortune, and your position,” Special Agent Keri Farley, head of the FBI Atlanta, said in a news release. “In the end, when driven by greed, the verdict of guilty on all counts for these three defendants proves once again that financial crimes do not pay.”

Before the Chrisleys became reality television stars, they and a former business partner submitted false documents to banks in the Atlanta area to obtain millions of dollars in fraudulent loans, prosecutors said. They spent lavishly on luxury cars, designer clothes, real estate and travel and used new fraudulent loans to pay old ones, they said. Todd Chrisley then filed for bankruptcy, walking away from more than $20 million in loans, prosecutors said.

While her husband was in bankruptcy proceedings, Julie Chrisley created false financial documents to rent a home in Los Angeles, prosecutors said. Once they were in the house, they failed to pay rent and the property owner filed an eviction lawsuit.

It was around the time that Todd Chrisley filed for bankruptcy that the Chrisleys began to star in their reality show. It recorded in the Atlanta area at first and then in Nashville. They earned millions from the show and conspired with Tarantino to defraud the IRS, prosecutors said.

They operated a loan-out company that collected their income from the show and other ventures and kept the corporate bank accounts in Julie Chrisley’s name to avoid collection of half a million dollars in back taxes that Todd Chrisley owed, prosecutors said. When the IRS asked for information on the bank accounts, they transferred ownership to Todd Chrisley’s mother to try to further hide his income from the tax authorities, according to authorities.

Prosecutors said the couple failed to filed tax returns or pay taxes for several years, despite Todd Chrisley claiming on a radio program that he paid $750,000 to $1 million a year in federal income taxes.

Tarantino filed two false corporate tax returns for the loan-out company, falsely saying it earned no money and made no distributions in 2015 and 2016, prosecutors said.

Julie Chrisley submitted a false document in response to a grand jury subpoena to make it look like the Chrisleys hadn’t lied to the bank when they transferred ownership of the loan-out company to her husband’s mother, prosecutors said.