MINNEAPOLIS (Court TV) — After about 10 hours of deliberation over two days, former Minneapolis police officer Derek Chauvin has been found guilty of all charges including second-degree murder, third-degree murder and manslaughter.

Chauvin, 45, faces decades in prison for the death of 46-year-old George Floyd, Jr.

Judge Cahill has ordered a pre-sentence investigation (PSI) to be done in four weeks and has scheduled sentencing in eight weeks. Bail has been revoked and Chauvin is remanded into the custody of the Hennepin County Sherrif’s Office.

Because the state filed a notice of intent seeking an upward departure from the guideline sentence, Judge Cahill could give Chauvin the maximum sentence set out by statute if he finds certain aggravating factors. The defendant has a right to a hearing – known as a Blakely trial — in front of a jury to determine if aggravating factors exist, warranting an upward departure. Chauvin waived the hearing, leaving the decision in Judge Cahill’s hands.

On May 25, 2020, bystanders captured Chauvin kneeling on Floyd’s neck during a volatile arrest. Two other officers, Thomas Lane and J. Alexander Kueng, held Floyd’s abdomen and legs down while Officer Tou Thao maintained the scene. Prosecutors say Chauvin’s knee was on Floyd’s neck for nearly nine minutes. Floyd died at the scene.

The incident spurred protests across the world. The four officers were swiftly fired as demands grew for legal action and accountability. Just days after Floyd’s death, prosecutors charged Chauvin as the principle defendant with second-degree unintentional murder, third-degree murderand second-degree manslaughter. Lane, Keung and Thao were charged with aiding and abetting. 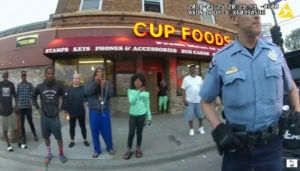 In this image from police body camera video former Minneapolis police Officer Derek Chauvin stands outside Cup Foods in Minneapolis, on May 25, 2020, with a crowd of onlookers behind him. The image was shown as prosecutor Steve Schleicher gave closing arguments as Hennepin County Judge Peter Cahill presided Monday, April 19, 2021, at the Hennepin County Courthouse in Minneapolis, in the trial of Chauvin who is charged in the May 25 death of George Floyd. (Court TV via AP, Pool)

The incident began when a store clerk at Cup Foods called 911 to report a man bought merchandise with a counterfeit $20 bill. officers Lane and Keung responded to the scene at 8:08 p.m. It was their first week as full-duty police officers and their first day riding together as partners.

With their body-worn cameras activated and running, Lane briefly spoke with the clerk who pointed them in the direction of Floyd, who was seated in a parked van. Three people in total were inside the vehicle including an adult female sitting in the backseat and another adult male in the passenger seat. Lane tapped his flashlight on Floyd’s window prompting him to open the door partially. The exchange quickly escalated after Lane asked Floyd to show both of his hands, which Floyd did not immediately do. Officer Lane drew his sidearm weapon, pointing it at Floyd’s open door using loud commands. “Put your f***ing hands up right now,” Lane instructed Floyd. Once Floyd put both hands on the steering wheel, Lane holstered his gun and then ordered Floyd to exit the vehicle. Floyd was immediately handcuffed and escorted by Lane over to the nearby sidewalk. For around two minutes, Floyd remained seated on the ground, handcuffed, asking the officers for more information about his detention. Lane asked Floyd if he was on anything, referring to drugs, based on perceived erratic behavior.

At 8:14 p.m., the officers decided to move Floyd from the sidewalk to their squad car. During this attempt, Floyd stiffened and fell to the ground telling officers he is claustrophobic. Moments later, officers Derek Chauvin and Tou Thao arrived on the scene in a separate squad car. Dispatch calls indicate the two senior officers were advised not to go to the scene, but Thao later explained to the Bureau of Criminal Apprehension he believed the two rookies needed their assistance.

The four officers made several attempts to get Floyd in the backseat of Lane and Kueng’s squad car by pushing Floyd from the driver’s side, resulting in an intense physical struggle that lasted several minutes.

Around 8:19p.m., Floyd ended up on the pavement face down, with Kueng holding Floyd’s back, Lane holding his legs and Chauvin’s left knee in the area of Floyd’s head and neck.

Chauvin’s placement of his knee on Floyd’s neck marked a time period that would be symbolically labeled “8 minutes and 46 seconds.”  This timing of 8:46 was initially embraced globally as a rallying cry in protests over Floyd’s death. Prosecutors have since revised the length of time they say Chauvin’s knee was on Floyd’s body to more than nine minutes, based on the review of the body worn camera video of Lane, Kueng and Thao. The arrest was far from discreet. Early in the encounter, a man in front of Cup Foods told Floyd he can’t win and should comply with officers. Floyd replied he didn’t want to win.

Later, the same man told Floyd to get up and get in the squad car, to which Floyd replied, “I will, I can’t move.” The opportunity to get up again did not happen. A small crowd began to form as onlookers noticed the officers’ actions. Officer Thao kept bystanders on the sidewalk, shielding his fellow officers from interference.  Floyd continued to twist his arms and body under the restraint by officers. He said, “I can’t breathe” and “please” repeatedly and at times called out, “Mama” and “I’m about to die.”

Meanwhile, police volleyed ideas on how to handle Floyd. Lane suggested getting Floyd’s legs up, but Chauvin told him it’s best to leave him where he is. Thao suggests using a Maximum Restraint Technique (MRT), saying, “We’re just going to have to hogtie him.” The MRT or Hobble restraint is a strap used to “secure a subject’s feet to their waist.” Thao searched for the Hobble strap but concluded that waiting for the ambulance was better because using the device would prompt the need to call a supervising sergeant to the scene.  Thao asked Lane if anyone had requested a “code 3” EMS response, which includes activated lights and sirens. When Lane responded “no,” Thao upgraded the EMS response from code 2 to code 3.

After nearly four minutes of holding Floyd down, Lane asked if they should roll Floyd onto his side citing a concern about excited delirium. Chauvin and Kueng rejected the suggestion and all officers held their positions. At 8:24 p.m., Floyd’s body had become limp and his consistent cries quieted. Kueng checked Floyd’s wrist for a pulse and told the other officers he didn’t detect one. The angry bystanders demanded officers release Floyd, convinced the restrained man was no longer resisting or breathing. Minutes passed with Floyd still pinned to the ground before the ambulance arrived. Officer Kueng announced to the medics arriving on the scene that Floyd was “not responsive.” As one medic checked Floyd for vitals, Chauvin made slight movements with his left knee to a spot further down on Floyd’s body, in the shoulder area. Once medics were ready with a gurney to transfer Floyd to the ambulance, Chauvin removed his knee from Floyd’s body. Lane offered to ride along with his body-worn camera still recording. The medics performed chest compressions but were unable to revive Floyd. He was pronounced dead at Hennepin County Medical Center at 9:19 p.m.

The collective public viewing of George Floyd’s death via viral videos ignited a wave of emotions and outrage nationally and internationally. Floyd’s Memorial Day death became a memorialized event in the weeks that followed. People took to social media, then to the streets demanding justice. Public leaders and activists called for the arrest of the officers involved. Black Lives Matter protests were planned in Minneapolis and cities across the country. Social media account users posted blacked-out squares—a signal of solidarity with the fight to end racism and brutality. A memorial service in Minneapolis and a funeral in Houston for Floyd drew crowds of thousands. Peaceful demonstrations persisted nationally day after day but after nightfall, looting and rioting rocked major cities including Atlanta, New York City, and St. Louis. The National Guard mobilized in Minnesota to quell the damage caused by the unrest. Local governments and law enforcement agencies began to make law and policy changes in an effort to grapple with a movement that was growing beyond Floyd’s death.

The names of African Americans killed unjustly by law enforcement or vigilantes were added to the fight for Floyd. The scrutiny of Breonna Taylor and Ahmaud Arbery’s deaths months earlier intensified. In unprecedented unity, the calls for justice crossed racial and political lines and state borders.

On March 29, less than ten months removed from the height of those demands, opening statements will begin in the trial of Minnesota v. Derek Chauvin. Court TV will carry the entire proceedings live.

Ivy Brown and Beth Hemphill of Court TV News contributed to this report.