WAUKESHA, Wis. (Court TV) — Victims of the carnage wreaked by Darrell Brooks at Waukesha’s annual holiday parade last year urged the judge to sentence him to the maximum term for each of the 76 charges, including six murder counts for which he was convicted.

Brothers Matt and Chris Owen confronted Brooks about the murder of their mother, Leana Joy Owen, 71. She was one of the ‘Dancing Grannies’ who took part in the parade.

“You ran her down like she was nothing, since that day you have shown no remorse, you offered no explanation for your atrocities,” Matt said. “It offends me that you are sitting here breathing while she is not. You deserve contempt and death.”

Brooks’ lack of empathy was not lost on his victims. He frequently rolled his eyes, and mocked some of them with gestures by clapping or thumping his chest. 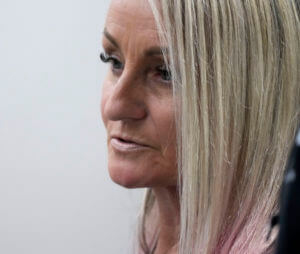 Sheri Sparks, mother of 8-year-old Jackson Sparks who was killed in the parade, reads a victim statement during Darrell Brooks’ sentencing in a Waukesha County Circuit Court in Waukesha, Wis., on Tuesday, Nov. 15, 2022.  (Mike De Sisti/Milwaukee Journal-Sentinel via AP, Pool)

Emotions ranged from anger to grief as victims walked up to the lectern to tell their story of loss and pain. Sheri Spark is the mother of the youngest victim, 8-year-old Jackson Spark, who was struck and killed by Brooks while marching in the parade with his baseball team.

Spark described the horror of finding her two sons injured,  lying on the road, both had been hit by Brooks’ SUV, and suffered traumatic brain injuries. She told the judge that they had come close to losing both sons. Despite efforts to save him, Jackson’s  injuries were too severe to overcome and described having to leave him at the hospital as “gut-wrenching.”

“I feel gutted and broken,” she said. “It hurts to breathe sometimes;  it hurts to live without him here. The pain I carry with me every day feels so heavy. I have to push forward to help Tucker heal.”

Among the younger survivors was a 12-year-old who since the attack has had to undergo 15 surgeries to repair a broken pelvis and to remove scar tissue resulting from her dependence on a ventilator during her recovery. Her physical and emotional scars remind her daily of the trauma.

“My scars make me insecure,” she sobbed. “They will be there forever. I have to reteach my body move all over again.”

A member of the dance troupe that took part in the parade, she described finding the strength to return to dance, and for the first time since the attack has participated in a competition this year while still recovering from injuries that include a permanent curve to her spine. 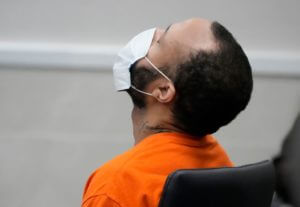 Darrell Brooks listens to victim statements during his sentencing in a Waukesha County Circuit Court in Waukesha, Wis., on Tuesday, Nov. 15, 2022. Dozens of people are expected to speak at the sentencing proceedings for Brooks, who was convicted of killing six people and injuring dozens more when he drove his SUV through a Christmas parade in Waukesha last year. (Mike De Sisti/Milwaukee Journal-Sentinel via AP, Pool)

Darrell Brooks became combative with the judge at one point when he wanted the her to address ‘an issue’ he had with Michael Carlson, who spoke on behalf of his sister Tamara Durand, who was another fatality during Brooks’ rampage.

Brooks would not heed Judge Dorow’s warnings to be quiet and was removed from the courtroom until he agreed to behave.

At the conclusion of the victim impact statements, prosecutor Susan Opper urged the judge to impose consecutive life sentences for the six murders, and the maximum term for the remaining criminal charges, arguing that the sentences should be stacked just as bodies were stacked in the wake of the holiday attack.

Before imposing sentence, Judge Dorow is expected to hear from three witnesses in support of Brooks; his mother, grandmother, and the mother of his youngest child.