WAUKESHA, Wis. (WTMJ) — Around 45 people will deliver victim impact statements to the court in Darrell Brooks‘ sentencing, according to a letter from District Attorney Sue Opper.

Opper said of those people “approximately” nine are children under the age of 18. The state has provided the court their names, which remain under seal at this time.

A jury found Brooks guilty last month on all counts, including six of intentional homicide for driving an SUV into the Waukesha Christmas Parade last November. Six people were killed and dozens injured.

Darrell Brooks has also filed a list of people with the court to speak on his behalf. On Friday, WTMJ-TV spoke with Brooks’ mother, Dawn Woods, and his grandmother, Mary Darlene Edwards. Both said they plan to give a statement via Zoom.

“I’m going to have to do this because I want to help people,” said Edwards, who lives in Detroit, Michigan. “I have three generations of bi-polar people in my family.”

At 80 years old, Edwards is an active ordained minister and mental health advocate. Both Edwards and Woods believe Brooks is mentally ill, and his illness led him to drive through the parade route.

“There is so much focus now on mental health. I don’t want to call it a hot topic. It’s a critical issue,” said Edwards. 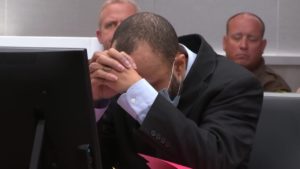 It’s unclear if the additional seven people on Brooks’ list plan to speak during sentencing, either in-person or via Zoom. WTMJ-TV reached a friend of Brooks on the list, who said she was not aware he had named her a speaker.

Jonathan Lavoy, a criminal defense attorney and partner at Kim and Lavoy in Waukesha, said the number of speakers for Brooks will not have any bearing on his sentence.

“I think the sentence is a foregone conclusion in this situation,” said Lavoy. “I think the judge will certainly listen to what is said about Mr. Brooks. I think everyone knows he’s going to get life in prison.”

Court begins at 8:30 a.m. on Tuesday. A second session for sentencing will begin at 1 p.m. on Wednesday.

Court TV is carrying the proceedings live on YouTube.

This story was originally published Nov. 11, by WTMJ in Milwaukee, an E.W. Scripps Company.