CONCORD, N.H. (AP) — The wife of a man whose daughter went missing in 2019 has been charged with welfare fraud for collecting food stamps in her name, the New Hampshire attorney general’s office said Thursday.

Kayla Montgomery, 31, of Manchester, has been charged one with one count of welfare fraud for obtaining $1,500 in food stamps from December 2019 to June 2021 for Harmony Montgomery even though the girl was not living with Kayla and her husband Adam Montgomery.

Kayla Montgomery, who is not the biological mother of Harmony Montgomery, will be arraigned at 11 a.m. in the Hillsborough County Superior Court. It was unclear if she had a lawyer and a phone listing for her could not be found.

Adam Montgomery was charged Wednesday with several counts, including failing to have her in his custody. The 31-year-old had not guilty pleas entered on his behalf by his lawyer. He has been jailed without bail.

In an interview with police on New Year’s Eve, Kayla Montgomery, who shares three younger children with her husband, said she last saw Harmony in November or December 2019. She said her husband was driving Harmony to the child’s mother in Massachusetts. She said she believed Harmony had been returned to the mother and never saw or heard about Harmony after that day, according to the police document. 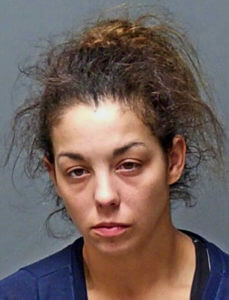 Kayla Montgomery also told police she hadn’t seen Adam since October, and had not spoken to him since November.

Manchester police set up a 24-hour tip line this week and offered cash rewards in an effort to find Harmony Montgomery. They said they were working with the state Division for Children, Youth and Families and the National Center for Missing and Exploited Children to find her.

Harmony’s mother had called Manchester police in November to say she hadn’t seen her daughter in a while. She originally told officers she hadn’t seen her in over six months, but then said it had been since Easter 2019, when she video chatted with the father and Harmony, according to a police affidavit.

Police said Adam Montgomery had legal custody of Harmony. He was arrested on a second-degree assault charge Tuesday, as well as charges of interfering with custody and child endangerment. Police accused him of “purposely violating a duty of care, protection or support” by failing to know where she has been since late 2019 — the last reported sighting of Harmony.

In an interview with police, Harmony’s great-uncle told officers he saw her with a black eye in July 2019. He said Montgomery told him he hit her after he had seen his daughter holding her hand over her younger brother’s mouth to stop him from crying, according to the police documents.

Montgomery’s brother also told police he was concerned he was “super short” with the child.