GREEN BAY, Wis. (Court TV) – A Wisconsin man convicted of murdering his missing wife eight years ago has been sentenced to life in prison without the possibility of parole. In February, a jury found 75-year-old James Prokopovitz guilty of first-degree murder in the presumed death of Victoria Prokopovitz. Victoria was last seen in April 2013. Prosecutors successfully argued James killed his wife to be with another woman.

A Wisconsin man was convicted of first-degree intentional homicide for the 2013 disappearance of his wife, who remains missing.

Prosecutors in Green Bay claimed James Prokopovitz killed Victoria Prokopovitz because he was tired of caring for his ailing wife and wanted to rekindle a relationship with an old flame. Prokopovitz’s defense would not concede Victoria is dead, leaving the state to prove she is deceased, and that the defendant intended to cause her demise — but not how he may have done it.

Investigators acknowledged they could not prove what happened to Victoria Prokopovitz, despite extensive ground and aerial searches throughout Brown County, including industrial waste sites the defendant had access to through his employment with an excavation contractor.

Brown County District Attorneys argued the absence of Victoria’s remains pointed to Prokopovitz’s guilt, suggesting he may have disposed of her body in a sludge pond. Two jail informants testified that Prokopovitz said he was 100% certain that his wife would never be found; one of them said Prokopovitz implied she might have killed herself and he got rid of the body.

Otherwise, prosecutors argued the defendant’s words and actions demonstrated his guilt, especially when he began changing parts of his story and others didn’t add up, such as the timeline of his relationship with Kathy Friday. Prokopovitz and Friday told investigators the relationship began after Victoria disappeared, but Friday’s son testified that she told him they started talking in early 2013. Ultimately, they confessed to lying about the circumstances of their first sexual encounter, but insisted it was after Victoria went missing.

Prokopovitz’s defense emphasized the lack of direct evidence tying him to Victoria’s disappearance and suggested she may have killed herself. 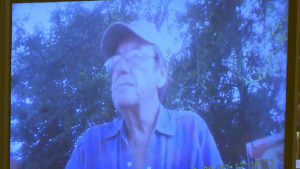 Prosecutors show video of James Prokopovitz in court who they believe killed his wife, 59-year-old Victoria Prokopovitz around April 25, 2013.

Lawyer John D’Angelo pointed to evidence of Victoria’s struggles with depression and anxiety, including two documented suicide attempts. In his opening and closing, he drew attention to what she told her children after one of those attempts: “Next time, you won’t find me.”

D’Angelo accused the state of pandering to the jury’s emotions by painting his client as a callous and abusive husband, based mainly on accounts from family members who were in and out of Victoria’s life and the testimony of an ex-wife who said he pointed a gun at her and their daughter some 40 years prior.

“People turned on him because he wasn’t grieving like they wanted him to,” D’Angelo said.

The jury heard seven days of testimony from 44 witnesses for the state. The defendant chose not to testify, and the defense did not put up a case. Instead, Prokopovitz’s lawyer questioned several state witnesses at length about various aspects of the investigation in an attempt to sow reasonable doubt.

“The state’s witnesses were my witnesses,” lawyer John P. D’Angelo said in his closing.

Emanuella Grinberg and Ivy Brown of Court TV contributed to this report.