MINNEAPOLIS (AP) — The Minnesota police officer who shot and killed Daunte Wright told jurors at her manslaughter trial on Friday that she “didn’t want to hurt anybody” that day, saying during sometimes tearful testimony that she shouted a warning about using her Taser on Wright after she saw fear in a fellow officer’s face.

Kim Potter, 49, has said she meant to draw her Taser instead of her handgun during the April 11 traffic stop in Brooklyn Center when she killed Wright. Sobbing, she testified that she was “sorry it happened” and that she doesn’t remember what she said or everything that happened after the shooting, saying much of her memory of those moments “is missing.”

Potter is charged with first-degree and second-degree manslaughter in the killing of Wright, a 20-year-old Black motorist who was pulled over for having expired license plate tags and an air freshener hanging from his rearview mirror. Potter, who was training another officer at the time, said she probably wouldn’t have pulled Wright’s car over if she had been on her own that day because many drivers were late on renewing their tags at that point of the pandemic. 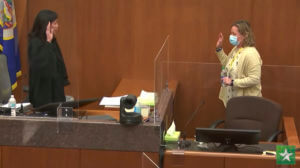 In this screen grab from video, Hennepin County Judge Regina Chu left, swears in former Brooklyn Center Police Officer Kim Potter before she testifies in court Friday, Dec. 17, 2021 at the Hennepin County Courthouse in Minneapolis, Minn. Potter is charged with first and second-degree manslaughter in the April 11 shooting of Daunte Wright, a 20-year-old Black motorist, following a traffic stop in the Minneapolis suburb of Brooklyn Center.(Court TV, via AP, Pool).

After she and the other two officers at the scene that day decided to arrest Wright on an outstanding warrant for a weapons violation, the encounter “just went chaotic,” Potter told the jury. Wright pulled away from the officers and got back in his car, police body camera footage of the traffic stop shows.

“I remember yelling, ‘Taser, Taser, Taser,’ and nothing happened, and then he told me I shot him,” Potter said through tears. Her body camera video recorded Wright saying, “Ah, he shot me” an instant after the shooting.

Potter’s attorneys argued that she made a mistake but also would have been justified in using deadly force if she had meant to because one of the other officers, then-Sgt. Mychal Johnson, was at risk of being dragged by Wright’s car.

Potter said nothing in court about making a mistake, and she seemed to be giving a chronology of what happened without providing insight into what she was thinking.

During cross-examination, prosecutor Erin Eldridge noted that Potter told a defense expert that she didn’t know why she drew her Taser. Quoting from the expert’s report, Eldridge said that Potter said: “I don’t have an answer, my brain said grab the Taser.” Potter told the court she didn’t recall saying that.

Eldridge drove hard at Potter’s training, getting her to agree that her use-of-force training was a “key component” to being an officer. Potter testified that she was also trained on when to use force and how much to use, and that there was a policy that dictated what officers could or could not do.

Potter testified under questioning by one of her lawyers that she had no training on “weapons confusion,” saying it was mentioned in training but wasn’t something her department’s officers were physically trained on. She also said she never used a Taser while on duty during her 26 years on the force, though she had pulled it out a few times to de-escalate situations, and that she never used her gun until the day she shot Wright.

Potter, who was training Officer Anthony Luckey, said Luckey noticed Wright’s car in a turn lane with the signal turned on inappropriately and then saw an air freshener hanging from the rear view mirror as well as expired tags. 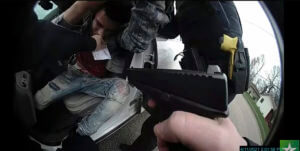 She said Luckey wanted to stop the vehicle, and although she “most likely” wouldn’t have done so if she’d been on patrol by herself, it is important for trainees to have many encounters with the public. She said after they found there was a warrant for Wright’s arrest, they were required to take him into custody.

She said they were also required to find out who Wright’s female passenger was because a woman — a different one as it turned out — had taken out a restraining order against him.

While defense attorney Earl Gray walked her though what happened that day, he did not ask her whether she meant to draw her Taser. A prosecution witness testified earlier in the week that she would not have decided to use her Taser if she thought there was a danger it could cause a death or great bodily harm.

Potter, who resigned two days after the shooting, broke down in tears as she described the traffic stop at the moment of the shooting. She also became emotional when Eldridge played video of her pointing her gun at Wright. For most of the cross-examination, she was matter-of-fact and gave brief answers.

Under questioning by her own attorney, Potter said she has been in therapy since the shooting, and that she left Minnesota and is no longer a police officer. And she said she quit the police force because “there was so much bad things happening. … I didn’t want anything bad to happen to the city.”

The death of Wright set off angry demonstrations for several days in Brooklyn Center. It happened as another white officer, Derek Chauvin, was standing trial in nearby Minneapolis for the killing of George Floyd.

Before Potter took the stand, a defense witness testified that police officers can mistakenly draw their guns instead of their Tasers under high-stress situations because their ingrained training takes over.

Laurence Miller, a psychologist who teaches at Florida Atlantic University, said Friday that the more someone repeats the same act, the less they have to think about it and there can be circumstances during a stressful situation in which someone’s normal reactions may be “hijacked.” 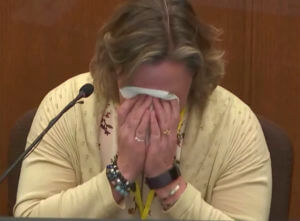 In this screen grab from video, former Brooklyn Center Police Officer Kim Potter becomes emotional as she testifies in court, Friday, Dec. 17, 2021 at the Hennepin County Courthouse in Minneapolis, Minn. Potter is charged with first and second-degree manslaughter in the April 11 shooting of Daunte Wright, a 20-year-old Black motorist, following a traffic stop in the Minneapolis suburb of Brooklyn Center. (Court TV, via AP, Pool)

Miller said that when a person learns a new skill, memory of an old skill might override that, resulting in an “action error” in which an intended action has an unintended effect.

“You intend to do one thing, think you’re doing that thing, but do something else and only realize later that the action that you intended was not the one you took,” he said.

Some experts are skeptical of the theory. Geoffrey Alpert, a criminology professor at the University of South Carolina who is not involved in Potter’s trial, has said there’s no science behind it.

On cross-examination, Eldridge quoted from a 2010 article Miller wrote in which he described how police can avoid what he termed “one big mistake.” He wrote that many such mistakes are preventable through proper training and practice.

Both sides will present their closing arguments on Monday before the case goes to the mostly white jury.
___
Associated Press writers Tammy Webber in Fenton, Michigan, and Steve Karnowski in Minneapolis contributed to this report.