MADISON, Wis. (AP) — A Wisconsin woman who admitted to helping stab a classmate to please online horror character Slender Man will be freed Monday from a mental health institution under strict conditions, a judge ruled Friday.

Anissa Weier, 19, will be released after spending almost four years at the Winnebago Mental Health Institute in Oshkosh. A conditional release plan calls for her to live with her father, submit to around-the-clock GPS monitoring and receive psychiatric treatment, among other things. She won’t be allowed to use the internet except at home, and the state Department of Corrections will monitor her online activity. 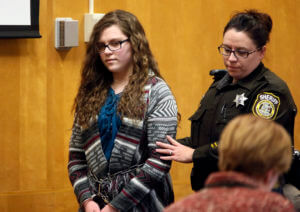 FILE – In this Dec. 21, 2017, file photo, Anissa Weier, one of two Wisconsin girls who tried to kill a classmate to win favor with a fictional horror character named Slender Man, is led into Court for her sentencing hearing, in Waukesha, Wis. A Wisconsin judge on Thursday, July 1, 2021, ordered her release after being convicted of the stabbing in 2014. Weier asked Waukesha County Judge Michael Bohren this year to release her from the Winnebago Mental Health Institute, arguing she was no longer a threat to anyone. (Michael Sears/Milwaukee Journal-Sentinel via AP, File)

Weier and a friend, Morgan Geyser, both were committed to Winnebago after pleading guilty to attacking Payton Leutner when they were all 12 years old. Geyser stabbed Leutner multiple times as Weier urged her on. Leutner suffered 19 stab stab wounds — including one that narrowly missed her heart — and barely survived.

Waukesha County Judge Michael Bohren said the conditions of Weier’s release were fair and the plan “provides for the protection of the community” as well as for Leutner and for Weier herself.

Weier, dressed in a dark suit and smiling occasionally, said nothing during the 20-minute proceeding. The judge delayed her release until Monday after her attorney, Maura McMahon, said the mental health facility would be able to better process her release after the weekend.

“She looks forward to moving on into a productive life,” McMahon told the judge.

Leutner’s family declined to speak during the hearing. Leutner declined to comment when reached by phone later Friday afternoon.

As part of Weier’s release conditions, a case manager will monitor her medication for post-traumatic stress disorder, anxiety and a personality disorder. Her cellphone won’t be able to access the internet, and she won’t be allowed to use social media at all. She also won’t be allowed to consume alcohol or drugs, enter a bar, possess a weapon or have any contact with Leutner or her family.

Deputy District Attorney Ted Szczupakiewicz said he had no objections to the release conditions.

Police found Weier and Geyser later that day walking on Interstate 94 in Waukesha. They told investigators said they attacked Leutner because they thought it would make them Slender Man’s servants and prevent him from killing their families. After the stabbing they began walking to Slender Man’s mansion, they said.

The Slender Man character grew out of internet stories. He’s depicted as a spidery figure in a black suit with a blank white face. Sony Pictures released a movie about Slender Man stalking three girls in 2018 Weier’s father, Bill, blasted the film as an attempt to capitalize on a tragedy.

In her petition for conditional release, she argued that she had exhausted all her treatment options at the facility and needed to rejoin society. She vowed she’d never let herself “become a weapon again.” Bohren ruled in July that Weier no longer posed a threat and ordered state officials to draw up a release plan.

Geyser pleaded guilty to attempted first-degree intentional homicide. Bohren sentenced her to 40 years in a mental health facility in February 2018. She has argued that her case should have been heard in juvenile court, but an appellate court ruled last year the case was properly heard in adult court.

Her trial attorney, Anthony Cotton, said Friday that Geyser has not filed a petition for release and declined further comment. Court records show that during her sentencing, Bohren ruled that conditional release would “pose a significant risk of bodily injury” to Geyser or others.
___
Associated Press writer Doug Glass in Minneapolis contributed to this report