SAVANNAH, Ga. (AP) — Ahmaud Arbery’s parents on Friday praised the indictment of a former Georgia prosecutor on charges of misconduct in response to their son’s killing, calling it “a very huge win.”

A grand jury in coastal Glynn County indicted former Brunswick Judicial Circuit District Attorney Jackie Johnson on Thursday on charges of violating her oath of office and obstructing police. State prosecutors alleged that she used her position to delay arrests of the white men who chased and killed Arbery, a 25-year-old Black man. 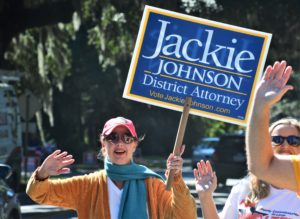 Johnson was the county’s top prosecutor when Arbery was fatally shot last year, and one of the armed men who pursued him had worked for her as an investigator.

“Yesterday was a very huge win,” Wanda Cooper Jones, Arbery’s mother, told reporters in a video news conference Friday. “I’m speechless. Unfortunately, Ahmaud is not here with us today. But losing Ahmaud, it will change some things here in the state of Georgia.”

Georgia Attorney General Chris Carr, a Republican, sought the indictment after requesting an investigation of possible misconduct by local prosecutors who failed to bring charges in the killing.

Father and son Greg and Travis McMichael armed themselves with guns and gave chase in a pickup truck on Feb. 23, 2020, after they spotted Arbery running in their neighborhood just outside the port city of Brunswick.
A neighbor, William “Roddie” Bryan, joined the chase and took cellphone video of Travis McMichael fatally shooting Arbery at close range with a shotgun as Arbery fought back with his fists.

The McMichaels told police they thought Arbery was a burglar and that Travis McMichael shot him in self-defense. No arrests were made in the shooting until more than two months later, after the cellphone video leaked online, sparking a national outcry, and the Georgia Bureau of Investigation took over the case. The McMichaels and Bryan are now jailed as they await trial on murder charges.

Johnson has insisted she did nothing wrong, saying she immediately recused her office from handling the case because Greg McMichael had been an employee.

Still, Arbery’s parents and their attorneys have long accused the ex-district attorney of trying to help the young man’s killers avoid prosecution.

“Ain’t no man or woman above the law, and it was a great day when they arrested Jackie Johnson,” Marcus Arbery Sr., the slain man’s father, told reporters.

Johnson did not immediately return phone messages seeking comment. It was not immediately known if she had an attorney to represent her. None was listed in the case record of the court where the indictment was filed.

Johnson would face one to five years in prison if convicted of violating her oath of office. The obstruction charge is a misdemeanor, punishable by up to a year in jail.

The indictment says Johnson violated her oath by “showing favor and affection” to Greg McMichael and “failing to treat Ahmaud Arbery and his family fairly and with dignity.” It also says she obstructed police by “directing that Travis McMichael should not be placed under arrest.”

“She should spend time in prison,” said Lee Merritt, an attorney for Arbery’s mother. “Her actions are not just acts of negligence, but she actively worked to cover up the murder.”

Atlanta defense attorney Andrew Fleischman, who isn’t involved in the case, said the things Johnson is accused of doing in the indictment may show favoritism and poor judgment, but they don’t appear to be crimes.

“I absolutely hate the way Jackie Johnson used her discretion,” said Fleischman, an appellate attorney who has represented clients prosecuted by Johnson’s office. “But to say that using your discretion in a way another prosecutor disagreed with is a violation of your oath, that seems a bridge too far.”

Johnson told The Associated Press in May 2020 that Glynn County police contacted two of her assistant prosecutors on the day of the shooting. She said it was the officers who “represented it as burglary case with a self-defense issue.”

“Our office could not advise or assist them because of our obvious conflict,” Johnson said.

She called a neighboring prosecutor, Waycross Judicial Circuit District Attorney George Barnhill, to advise police. Carr, the state attorney general, appointed Barnhill to take over the case involving Arbery’s shooting a few days later. Carr said last year that Johnson never told him she had already involved Barnhill in the case and that Barnhill had already told police he saw no grounds for arrests.

Johnson blamed the controversy over Arbery’s death for her election defeat last year after a decade as top prosecutor for the five-county circuit in southeast Georgia. She was defeated by independent candidate Keith Higgins, who had to collect thousands of signatures to get on the ballot.