FLAGSTAFF, Ariz. (AP) — A leader of a small polygamous group on the Arizona-Utah line pleaded not guilty Thursday to federal charges of tampering with evidence, weeks after being stopped on a highway with young girls in an enclosed trailer.

Samuel Bateman, 46, was indicted earlier this month on three counts of destroying or attempting to destroy records, and tampering with criminal proceedings. He pleaded not guilty in U.S. Magistrate Court in Flagstaff, a mountain city where he was arrested in late August by a state police agency after someone spotted small fingers in a gap of the trailer’s rear door. 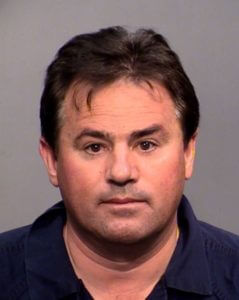 Authorities found three girls, between the ages of 11 and 14, in the trailer he was hauling through Flagstaff, according to court documents. The trailer had a makeshift toilet, a couch, camping chairs and no ventilation, the documents state. The documents didn’t say if the girls are related to Bateman, and it wasn’t discussed during Thursday’s hearing.

Bateman was a former member of the Fundamentalist Church of Jesus Christ of Latter-Day Saints, or FLDS, until he left in recent years and started his own small offshoot group, said Sam Brower, who has spent years investigating the group. Bateman was once among the trusted followers of imprisoned leader Warren Jeffs, but Jeffs recently denounced Bateman in a written revelation sent to his followers from prison, Brower said.

Bateman’s group still practices plural marriage with a small following of fewer than 100 people, estimated Brower, who wrote a book on the FLDS and appeared in the recent Netflix series, “Keep Sweet: Pray and Obey.”

Federal prosecutor Patrick Schneider said Bateman talked to supporters in Colorado City, Arizona, from the Coconino County Jail in Flagstaff and instructed them to delete communications sent through an encrypted private messaging system, and demanded all women and girls obtain passports.

Schneider said the state child welfare agency has removed children from Bateman’s home in Colorado City where the FBI had recently served a search warrant.

Darren DaRonco, a spokesman for the Arizona Department of Child Safety, declined to comment in an email Thursday, citing confidentiality laws. FBI spokesman Kevin Smith said in an email that the search warrant is sealed.

Bateman posted bond on the state charges. He was arrested again Tuesday in Colorado City by federal authorities who were investigating whether children were being transported across state lines for sexual activity, Schneider said. If convicted, Bateman faces a maximum of 20 years in prison on each federal charge.

Bateman’s attorney, Adam Zickerman, cautioned against inferring the federal case was about religious persecution, though he didn’t specify Bateman’s faith or say if he practices polygamy. Zickerman said Bateman is not a danger to the community.

Schneider cited a pretrial services report in saying that Bateman had relationships with multiple women but also didn’t mention whether Bateman belonged to any polygamous groups.

Both the U.S. Attorney’s Office in Arizona and Zickerman declined to comment following Thursday’s court hearing, as did two women who were sitting in the gallery and met with Zickerman.

U.S. Magistrate Judge Camille Bibles ordered that Bateman remain behind bars while the case winds through the courts. She noted Bateman is a pilot and survivalist who has followers and international contacts who might help with financial or other resources on a moment’s notice. She said she also was concerned about young girls in vulnerable positions.

“Courts have a tremendous interest in protecting people who can’t protect themselves,” she said.

Bateman listed a mailing address in Colorado City, where a patchwork of devout members of the polygamous FLDS, ex-church members and those who don’t practice the beliefs live. Both Colorado City and its sister community of Hildale, Utah, have seen significant cultural shifts in recent years.

The FLDS group run by imprisoned leader Jeffs has lost much of its control over the communities. Jeffs is serving a life sentence in a Texas prison for child sex abuse related to underage marriages.

Polygamy is a legacy of the early teachings of The Church of Jesus Christ of Latter-day Saints, but the mainstream church abandoned the practice in 1890 and now strictly prohibits it.