BRUNSWICK, Ga. (AP) — Defense lawyers were expected to build on arguments that their clients were lawfully trying to stop burglaries in their neighborhood as they began presenting their case Wednesday in the murder trial of three white men for the killing of Ahmaud Arbery.

Prosecutors rested their case Tuesday afternoon after eight days of testimony from 23 witnesses.

Superior Court Judge Timothy Walmsley on Wednesday denied renewed requests for both a mistrial and to have high-profile visitors view the trial proceedings on a video screen in another room at the courthouse that has been set up for additional spectators as part of COVID-19 precautions.

The judge also denied requests by all three defendants to grant a directed verdict acquitting them on murder charges — requests that were based on arguments that the prosecutors’ case was legally insufficient to support convictions.

The presence of prominent civil rights leaders in the courtroom gallery remained an issue when the Rev. Jesse Jackson sat with Arbery’s parents in the back row on Wednesday for the second time this week. Attorneys for all three defendants have said they could unfairly influence the jury.

“They represent part of a national conversation” on racial injustice that has advocated for “conviction of the defendants,” said Jason Sheffield, an attorney for Travis McMichael, the man who shot Arbery. “And for that reason I do not think they should be present in the courtroom.”

Defense lawyers began presenting their cases to the disproportionately white jury at the Glynn County courthouse in the port city of Brunswick. 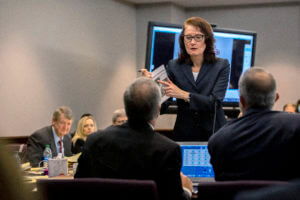 Prosecutor Linda Dunikoski shows evidence to members of the defense during the trial of Greg McMichael and his son Travis McMichael, and neighbor William “Roddie” Bryan in the Glynn County Courthouse, Tuesday, Nov. 16, 2021, in Brunswick, Ga. The three are charged with the February 2020 slaying of 25-year-old Ahmaud Arbery. (AP Photo/Stephen B. Morton, Pool)

Father and son Greg and Travis McMichael armed themselves and jumped in a pickup truck to pursue Arbery after he ran past their home from a nearby house under construction Feb. 23, 2020. A neighbor, William “Roddie” Bryan, joined the chase in his own truck, telling police that he tried to run Arbery off the road and then recorded cellphone video as Travis McMichael fired three shotgun blasts before Arbery fell facedown in the street.

Bryan’s attorney, Kevin Gough, argued on Wednesday that Arbery seemed suspicious to his client because he didn’t call out for help as the McMichaels chased him past Bryan’s front porch where Bryan was working.

“Mr. Arbery has the opportunity, before Mr. Bryan even understands what’s going on, to speak and say, ‘Help! Call 911!’”

Gough also suggested that Arbery was up to no good.

“When Mr. Arbery passes Mr. Bryan’s house, with all due respect, we know why,” he said. “And I think we can all discern that from the evidence.”

Arbery, 25, had enrolled at a technical college and was preparing to study to become an electrician like his uncles when he was killed.

The McMichaels told police they suspected Arbery was a burglar because security cameras had recorded him several times in the unfinished house on their street. Defense attorneys said Travis McMichael opened fire in self-defense after Arbery attacked him by throwing punches and trying to grab his gun.