BRUNSWICK, Ga. (AP) — Jury selection in the murder trial of three white men who chased and killed Ahmaud Arbery was disrupted Wednesday when prosecutors argued that defense attorneys had eliminated Black people from the jury pool because of their race.

Race is a central issue in the trial over the 25-year-old Black man’s death. Greg McMichael and his adult son, Travis McMichael, armed themselves and pursued Arbery in a pickup truck after they spotted him running in their neighborhood. A neighbor, William “Roddie” Bryan,” joined the chase in his own truck and took cellphone video of Travis McMichael shooting Arbery three times with a shotgun. 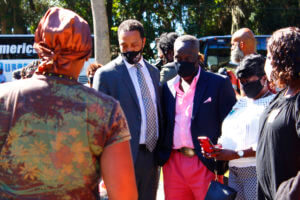 Marcus Arbery stands between a representative of the Transformative Justice Coalition and a community member October 2021 overlooking the stretch of pavement where his son, Ahmaud Arbery, was killed. (Asia Burns/The Atlanta Journal-Constitution via AP)

After more than two weeks of jury selection, attorneys on both sides Wednesday narrowed a panel of 48 potential jurors to a final jury of 12. Minutes later, prosecutor Linda Dunikoski told the judge that final panel included only one Black juror, with the rest all being white.

Dunikoski challenged defense attorneys’ decision to strike eight specific Black jurors, arguing they were cut from the panel because of their race. The U.S. Supreme Court had held it’s unconstitutional for attorneys during jury selection to strike potential jurors solely based on race or ethnicity.

Laura Hogue, an attorney for Greg McMichael, denied that the Black panelists’ race was considered in decisions to strike them from the jury pool.

“We have a very clear selection process within the defense team, and the issue of race is not one of the factors,” Hogue said. “I can give you a race neutral reason for any one of these.”

She noted one such juror, identified in court as No. 218, had written on her juror questionnaire that Arbery was shot “due to his color” and told attorneys during questioning that she felt the defendants were guilty. 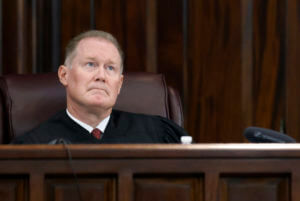 Superior Court Judge Timothy Walmsley was hearing arguments on the race-based challenges Wednesday afternoon and had not ruled on any of them.

In Glynn County, where Arbery was killed and the trial is being held, Black people account for nearly 27% of the population of 85,000, according to the U.S. Census Bureau. The racial breakdown stated by the judge showed 25% of the jury pool was Black.

Arbery’s death became part of the broader reckoning on racial injustice in the criminal legal system after a string of fatal encounters between Black people and police — George Floyd, Breonna Taylor and Rayshard Brooks, among others.

No one was charged in Arbery’s death until more than two months later, when the video of the shooting leaked online. The Georgia Bureau of Investigation took over the case from local police and soon arrested all three men on charges of murder and other crimes.

Before a final jury is seated, attorneys in a criminal case get to take turns eliminating a significant number of prospective jurors from the final pool, for virtually any reason. The one exception is over race or ethnicity.

The final process of elimination consisted of a bailiff passing a list of the potential jurors back and forth between the prosecutors and the three defense teams. Lawyers used the list to silently choose people to strike from the jury. 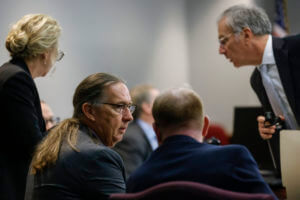 The judge brought the jury pool into court in three separate panels to allow for social distancing as a safeguard against coronavirus infections.

The judge said he hopes to begin the trial Thursday with opening statements from prosecutors and lawyers for the three defendants.

Defense attorneys say the McMichaels and Bryan committed no crimes. They say Arbery had been recorded by security cameras inside a nearby house and they suspected him of stealing. Greg McMichael told police his son opened fire in self-defense after Arbery attacked with his fists and grappled for Travis McMichael’s shotgun.

Investigators have said Arbery was unarmed and there’s no evidence he had stolen anything.

They mailed 1,000 jury duty notices, and nearly 200 people were questioned by the judge and attorneys at the courthouse during jury selection.