FAIRFAX, Va. (AP) — Jurors hearing testimony in Johnny Depp’s libel lawsuit against his ex-wife, actress Amber Heard, on Monday listened to audio recordings in which he referred to the violence that could ensue if their arguments were allowed to escalate.

“The next move, if I don’t walk away … it’s going to be a bloodbath, like it was on the island,” Depp says on the recording.

In other audio clips, Depp loudly shouts vulgarities at his wife, calling her a degrading name and yelling, “You stupid f—-” at her.

Depp winced on the stand as the clips were played, while Heard appeared to fight back tears.

Depp is suing Heard for libel over a 2018 op-ed piece she wrote in The Washington Post. She refers to herself as a “public figure representing domestic abuse.” 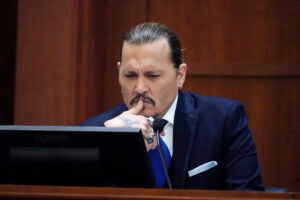 The clips were part of a grueling cross-examination of Depp that concluded late Monday morning, as he took the stand for a fourth day of testimony over his allegations that Heard falsely portrayed him as a domestic abuser.

Heard’s lawyers continued their onslaught of questions during their cross-examination. focusing on Depp’s drinking, drug use and charged interactions with Heard during their relationship.

Throughout the cross-examination, Depp showed his displeasure with Rottenborn’s questions. When Rottenborn interrupted one response, Depp said, “I was talking.” When Rottenborn said he considered the question to be fully answered, Depp responded, “as long as you’re happy.”

Depp also expressed disapproval as Rottenborn read headlines from a series of negative articles written about the actor, some dating back to 2014.

“These are all hit pieces. These are dreck,” Depp said.

Rottenborn introduced the articles to try to demonstrate that the 2018 Post article at the center of the case is not what damaged his reputation, but instead a long history of bad behavior.

While the libel lawsuit is supposed to center on whether Depp was defamed in the article, most of the trial has focused on ugly details of the couple’s brief marriage. Depp denies ever striking Heard, while Heard’s attorneys argue that Depp physically and sexually abused her and that his denials lack merit because he was often drunk and high to the point of blacking out.

Depp was last on the stand Thursday. Heard’s attorneys referenced his history of trashing hotel rooms as well as the time he smashed a bathroom sconce during an argument with Heard. Depp is also facing a lawsuit filed by a member of a film crew who alleges the actor assaulted them in 2018. 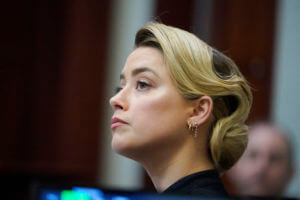 Actress Amber Heard listens in the courtroom at the Fairfax County Circuit Courthouse in Fairfax, Va., Monday, April 25, 2022. Actor Johnny Depp sued his ex-wife Amber Heard for libel in Fairfax County Circuit Court after she wrote an op-ed piece in The Washington Post in 2018 referring to herself as a “public figure representing domestic abuse.” (AP Photo/Steve Helber, Pool)

The jury has seen dozens of Depp’s texts to friends regarding his drinking, drug use and interactions with his then-wife, as well as his notes of contrition to Heard and her father.

Depp said the accusations and the article contributed to an unfairly ruined reputation that made him a Hollywood outcast and cost him his role in the lucrative “Pirates of the Caribbean” movie franchise. Heard’s attorneys say Depp’s damaged reputation is the result of his own bad behavior.

Depp has been on the stand in Fairfax County Circuit Court since Tuesday afternoon. The actor has testified that Heard abused drugs and that she was the one who physically attacked him. He called the drug addiction accusations against him “grossly embellished,” though he acknowledged taking many drugs.