BOISE, Idaho (KIVI) — There’s no suspect and no murder weapon in the deaths of four University of Idaho students in Moscow and that has some people wondering, “What’s left at the crime scene?”

The answer is likely a lot if police have DNA evidence, which experts say is commonly found in most stabbing cases. 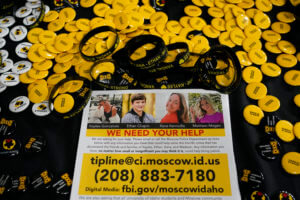 FILE – A flyer seeking information about the killings of four University of Idaho students who were found dead is displayed on a table along with buttons and bracelets, on Nov. 30, 2022, during a vigil in memory of the victims in Moscow, Idaho. (AP Photo/Ted S. Warren, File)

Idaho is home to one of the top experts in the world on forensic DNA.

Greg Hampikian, the co-director of the Idaho Innocence Project, helps exonerate the wrongly convicted like Amanda Knox and Christopher Tapp. He says he wouldn’t be surprised if investigators already have the DNA of the U of I killer.

Of course, no one but the investigators know for sure what evidence they have, but Hampikian says in the case of a brutal multiple stabbing, it’s unlikely the murderer would not leave DNA behind.

“If it’s a deep wound, their hand can come in contact with my shirt or my skin,” Hampikian says. “And so those sites where the injury is in a stabbing wound are very important to swab and collect DNA from for the touch.”

And anything touched in the house could also hold clues, Hampikian explains. The key is knowing where to look, and FBI investigators are well-trained in that.

The next problem is finding a match, and Hampikian has advice for investigators there: “I would just say to the investigators, ‘please make sure you take a sample from everyone you talk to; just ask them, ‘will you give us a DNA sample?'”

He says such practice would have caught the real killer of Idahoan Angie Dodge in 1996 and saved Christopher Tapp two decades in jail for a wrongful conviction.

RELATED: Idaho man gets life in prison in cold-case murder and rape

If Moscow investigators have suspicious DNA, a quick check of various criminal databases could turn up an identity. If the suspect has no criminal background though, investigators might have to rely on genealogy databases like 23 and Me to find a family connection and that can be difficult.

“A crime is like a surgery. It takes as long as it has to take. If you have to do genealogy, that’s a different kind of crime surgery than if you have a suspect and compare him to what you find on the door handle,” Hampikian said.

Hampikian says it’s common for assailants using a knife to also cut themselves during an attack and even if the blood is mixed with that of the victim, he says modern technology can easily separate the DNA. He says it doesn’t take more than a day or two to get results back if the case is a top priority.

This story was originally published Dec. 9 by KIVI in Boise, an E.W. Scripps Company.