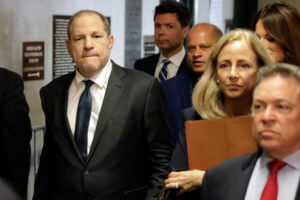 Harvey Weinstein, left, arrives at court for a hearing related to his sexual assault case, Thursday, July 11, 2019, in New York. Weinstein’s lawyer Jose Baez is going to court Thursday to get a judge’s permission to leave the case, the latest defection from what was once seen as a modern version of O.J. Simpson’s “dream team” of attorneys. (AP Photo/Richard Drew)

The defense motions included: Dismissal of the Predatory Sexual Assault counts, Suppression of evidence seized pursuant to search warrants, Reconsideration of the court allowing testimony about rape trauma syndrome and Permission for the defense to call an expert on the reliability of memory of sexual encounters.

These filings reveal new details of his upcoming trial:

Although the defense is objecting to this now, Judge James Burke already agreed to this in a closed-door hearing held on April 26, 2019, according to prosecution papers. Expert testimony about this type of post-traumatic stress disorder and why victims delay reporting has long been admitted into trials.

2. The Defense wants to call Dr. Deborah Davis, a social psychologist, to give expert testimony on topics including memory, suggestibility, misinterpretation of sexual consent communication and a phenomenon known as “voluntary unwanted sex.”

The Prosecution’s objection to this witness is two-fold: first, Davis is not a proper rebuttal to Dr. Ziv and second, this type of expertise has no support in the scientific community or in judicial opinions. Thus, it will be up to Judge Burke to decide if this requires a specialized hearing before trial known as a Frye hearing.

3. One of the accuser witnesses claims an additional incident in which she was sexually assaulted by Weinstein.

There are three accuser witnesses expected to testify, according to the prosecution One of those unnamed witnesses added an allegation in August 2019 and the defense is objecting to the admissibility because that incident should have been revealed during an April 26, 2019, closed-door hearing. The prosecution contends the additional incident should be admitted because it completes her narrative and does not unduly prejudice Weinstein.

4. Annabella Sciorra is not expected to be able to give a precise date of when Weinstein allegedly raped her.

The defense wants the Predatory Sexual Assault count dismissed partly due to the lack of detail provided in the Sciorra claim. In fascinating detail, the prosecution in their motion response, describe their efforts in trying to get an exact date within the winter months between 1993-1994 – when the alleged sexual assault occurred. The prosecution “contacted the building management” of Sciorra’s sublet, tried locating “former employees, they sought video recordings from the building (which were no longer available), they contacted people [she] went to dinner with just prior to the incident and other friends she sought comfort with after,” and the district attorneys even looked for the sublease agreement. Finally, the prosecutor and an investigator went to a New Jersey storage facility to search through Sciorra’s records, memorabilia and photographs in an attempt to pin down a date.

Pursuant to a search warrant executed on February 23, 2018, emails were obtained by the prosecution from two Weinstein Company accounts (dates range from 2005 to date of warrant) and from Weinstein’s Gmail account (dates range from the creation of the account on July 7, 2015, to January 1, 2018). These emails are expected to support claims from one or both of the accusers on the indictment – one accusation is from 2006 and the other from 2013.