BALTIMORE, Md. (WMAR) — A hearing is set for Monday afternoon in Baltimore to consider a request from prosecutors and defense attorneys to set free Adnan Syed as new evidence is considered in his case.

Syed is currently spending life in prison for the 1999 murder of his high school girlfriend Hae Min Lee, whose body was discovered in Leakin Park. 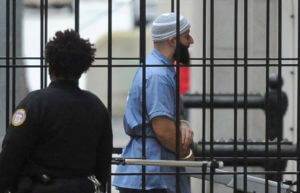 FILE – Adnan Syed enters Courthouse East prior to a hearing on Feb. 3, 2016, in Baltimore. Baltimore prosecutors asked a judge on Wednesday, Sept. 14, 2022, to vacate Syed’s conviction for the 1999 murder of Hae Min Lee — a case that was chronicled in the hit podcast “Serial”. (Barbara Haddock Taylor/The Baltimore Sun via AP, File)

He was a juvenile at the time he allegedly committed the murder.

The case gained national recognition when it was featured on the podcast Serial, which questioned some evidence used to convict Syed.

Other information has since come to light leading some to doubt whether Syed was ever in fact guilty.

“To be clear, the State is not asserting, at this time, that Mr. Syed is innocent,” The Baltimore City State’s Attorney’s Office said in a statement Wednesday. “While the investigation remains ongoing, when considering the totality of the circumstances, the State lacks confidence in the integrity of the conviction and requests that Mr. Syed be afforded a new trial.”

Defense attorneys claim that both of the ‘alternate’ suspects were known to investigators at the time Syed was charged, but failed to share those specific details.

Syed’s attorney Erica Suter is joining the state in requesting a hearing to vacate the sentence. In a statement, she wrote:

“Given the stunning lack of reliable evidence implicating Mr. Syed… coupled with increasing evidence pointing to other suspects… this unjust conviction cannot stand.”

If the request to release Syed is granted it does not mean the conviction goes away. Attorneys must decide whether to drop the charges or retry the case.

This story was originally published Sept. 17, 2022 by WMAR in Baltimore, an E.W. Scripps Company.