NEW YORK (AP) — A judge on Tuesday again refused to let British socialite Ghislaine Maxwell trade a jail cell for home detention, citing previous rulings that the nature of charges alleging Maxwell recruited teenage girls for Jeffrey Epstein to sexually abuse and her ability to flee make it impossible to let her out.

It was the fourth time that U.S. District Judge Alison J. Nathan has rejected a bail application for Maxwell, 59. Previous applications were also twice rejected by a Manhattan federal appeals court. 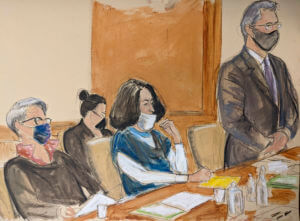 Nathan made the rejection in a two-page order in which she also promised that Maxwell will be transported from her Brooklyn federal jail to her trial “in a way that is humane, proper, and consistent with security protocols.” The judge said lawyers for the Metropolitan Detention Center assured these protocols in a sealed letter.

One of Maxwell’s lawyers complained that she was brought to the courthouse last week for a hearing nearly six hours before its scheduled start and was poked by a guard to force her to wake up when she briefly fell asleep in a cold holding cell.

The jury selection process began Thursday to find a dozen people willing to fairly decide whether prosecutors can prove that Maxwell helped Epstein recruit and sexually abuse teenage girls from 1994 to 2004. Maxwell has pleaded not guilty to all charges.

Prospective jurors answered written questions in advance of oral questioning of them by the judge next week as a pool of hundreds of individuals is reduced to 12 jurors and six alternates. Opening statements at a trial expected to last six weeks are scheduled for Nov. 29.

In arguing against bail, prosecutors wrote that the latest bail application “turns to rhetoric and anecdotes better suited to tabloids than briefs. Where legal arguments can be found, they are cursory and unpersuasive.”

Epstein, a wealthy financier, was found dead in August 2019 in his cell in a Manhattan federal jail where he awaited a sex trafficking trial.