SACRAMENTO, Calif. (AP) — A California judge on Wednesday set a May hearing to decide if prosecutors have enough evidence to go to trial against a man suspected being the notorious “Golden State Killer” who eluded capture for decades. 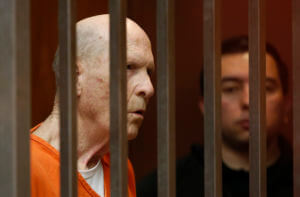 That’s more than two years after investigators said new DNA techniques linked the former police officer to at least 13 murders and more than 50 rapes across California in the 1970s and 1980s.

The rapist would break into couples’ suburban homes at night, binding the man and piling dishes on his back. He would threaten to kill both victims if he heard the plates fall while he raped the woman.

Defense attorneys had argued in court filings that they need another year to sort through the 250,000 pieces of evidence turned over by prosecutors. Prosecutors said they expect to call 150 witnesses over eight to 10 weeks, The Sacramento Bee reported.

White said he had to consider that witnesses and victims are growing older.

“I wish to make the case that there cannot be a case that’s too big to go to trial,” White said, drawing applause from victims sitting in the courtroom when he set the date.

One man in the audience earlier shouted “Amen” when a prosecutor said aging rape victims deserve to see the case advance, the Bee reported.

“Given the number of charges in this case, the amount of discovery is extraordinary,” supervising public defenders Alice Michel and Joseph Cress wrote in seeking the delay. “If forced to set a preliminary hearing date at this time, the defense will be unable to provide competent and effective representation for Mr. DeAngelo.”

Prosecutor Thien Ho countered that DeAngelo, 75, is responsible for the volume of charges.

“It was the defendant who decided to embark upon a crime spree that spanned 10 counties,” Ho said.

Some witnesses now are in their 80s and 90s, he told the judge, and a Santa Barbara investigator recently died from cancer in his 70s.

Prosecutors from Sacramento, Santa Barbara, Orange and Ventura counties in April said they would seek the death penalty if DeAngelo is convicted, making their announcement shortly after Gov. Gavin Newsom put a moratorium on executions so long as he is governor.