LIBERTY, Mo. (AP) — Supporters of a man who has been in prison for more than 30 years for killing his wife are upset that the Jackson County prosecutor hasn’t been willing to use a new law to give him another chance to prove his innocence, but her office says there is no new evidence to consider in the case.

Ken Middleton, 77, was sentenced in 1991 to life plus 200 years in the shooting death of his wife, Kathy Middleton, at their Blue Springs home on Feb. 20, 1990. He has always maintained his innocence and turned down a plea deal in 2004 that could have led to his release. 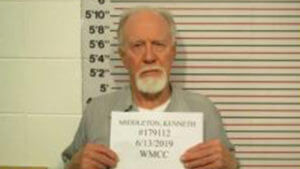 After a hearing in 2005 that included testimony and evidence, then-Jackson County Circuit Court Judge Edith Messina, who presided over the first trial, vacated Middleton’s 1991 conviction and ordered that he should have a new trial.

But in 2006, a Missouri appeals court denied the new trial, ruling only on jurisdictional grounds, not the question of Middleton’s guilt. His requests for clemency or a pardon have been unsuccessful.

Middleton’s legal options seemed to be exhausted until the Missouri Legislature passed a bill this year that allows local prosecutors to seek to have convictions set aside if there is evidence the person was innocent or that a constitutional error occurred in previous legal proceedings.

“We can prove both, if given the opportunity,” Middleton’s attorney Kent Gipson said in an interview.

Gipson sent a letter in June to Jackson County Prosecutor Jean Peters Baker asking her to reconsider Middleton’s case and file a motion for a new hearing that might lead to a judge exonerating him.

“His last and probably only hope to be exonerated rests under this law,” Gipson said. “The ball is in her court.”

Peters Baker spokesman Mike Mansur said the office has reviewed the Middleton case several times and would consider it again if new evidence that was not known at trial was presented.

Mansur said Messina’s ruling did not say Middleton was innocent and the prosecutor’s office does not consider evidence presented at the 2005 hearing to be new evidence.

When Middleton was tried, prosecutors argued that he pushed his wife against a wall and shot her as they argued after she discovered he had an affair.

Middleton said his wife grabbed a gun and walked away from him during the argument. He said she was in another room when she apparently dropped the gun and grabbed it as it fell, accidentally pulling the trigger.

Court records raise questions about the police investigation, with the crime scene disturbed and no physical evidence linking Ken Middleton to the shooting. For example, it appeared police altered a report on gunshot residue on Kathy Middleton to show testing was done only on one hand when it actually had been done on both.

Middleton’s attorneys at his original trial and initial appeal presented little or no evidence or witnesses in his defense.

Gipson said evidence and testimony at the 2005 hearing was not presented in Middleton’s trial or first appeal and “I don’t know how something presented more than a decade after a conviction is not new evidence.”

Middleton’s supporters note Peters Baker is using the new law to seek an evidentiary hearing for Kevin Strickland, who she and others say was wrongfully convicted of a triple murder in Kansas City more than 40 years ago. She has cited new evidence that was not heard by a jury before Strickland was convicted.

“It’s very frustrating that she says it’s OK to argue that Strickland was wrongfully convicted and kept in prison on procedural grounds but then turn around and step over the fact that my dad’s been in prison all these years just on jurisdictional grounds,” Middleton’s son Cliff Middleton said.