KENOSHA COUNTY, Wis. (Court TV) — Nearly fifteen years after a former Wisconsin stockbroker was convicted of murdering his wife, he will stand trial again for another shot at proving his innocence. 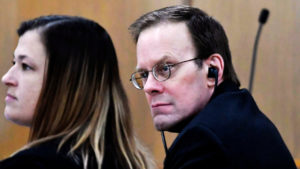 Defendant Mark Jensen appears in court Monday, Jan. 9, 2023 during day 1 of jury selection in his retrial. In 2008, Jensen was convicted of murdering his wife, Julie Jensen. He was granted a retrial last year. (Sean Krajacic, Kenosha News/Kenosha County Circuit Court/POOL)

The prosecution claims Mark Jensen, now 63, used antifreeze to poison and then suffocate his wife Julie Jensen, a stay-at-home mother of two, so he could continue his affair with his mistress, whom he later married. The defense claims Julie was depressed and took her own life by ingesting antifreeze, then framing her husband out of spite.

Decades after Julie’s death, a new jury will face the same question: Did Jensen kill his wife? Only this time, there are some major differences that could impact the verdict.

No Letter from the Grave

In the 2008 trial, a key piece of the state’s case included a letter Jensen’s wife wrote before her death that said if anything should ever happen to her, her husband ‘would be the first suspect’. 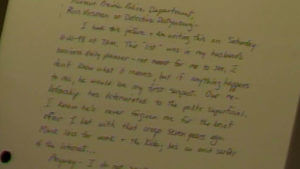 FILE – Photograph from Mark Jensen’s 2008 trial showing the letter his wife Julie Jensen wrote for police implicating her husband before she was killed. (Court TV)

It’s that same letter that landed Jensen’s appeal in front of the Wisconsin Supreme Court where the appellate court decision was upheld to not only grant Jensen a new trial, but also block Julie Jensen’s incriminating statements and letter from being used as evidence in his retrial.

The defense maintains the sealed letter Julie Jensen gave to her neighbors, which was addressed to the Pleasant Prairie Police Department, was unconstitutional due to the fact that Jensen’s defense attorneys could not cross-examine a ghost.

The presiding judge in Jensen’s retrial is the Honorable Anthony Milisauskas, who became deputy chief judge of Kenosha County in 2014. In 2008, Jensen’s trial was overseen by Judge Bruce Schroeder, who also presided the high-profile trial of Kyle Rittenhouse. 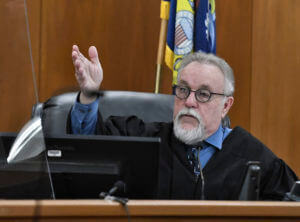 Honorable Anthony Milisauskas presides over Mark Jensen’s retrial on Monday, Jan. 9, 2023 during day 1 of jury selection in his retrial. In 2008, Jensen was convicted of murdering his wife, Julie Jensen. He was granted a retrial last year. (Sean Krajacic, Kenosha News/Kenosha County Circuit Court/POOL)

In addition to the letter, three witnesses from Jensen’s 2008 trial are unavailable to illness or death: the Jensens’ neighbors, Ted Wojt and Malgorzata Wojt, and Officer Ronald Kosman.

The court has agreed to play video recordings of their testimony from 2008 to the jury in Jensen’s retrial.

In 2008, the defense was granted a change of venue motion, allowing the trial to be moved from Kenosha County to Walworth County. This type of request is used for high-profile cases, to ensure a fairer jury pool.

Jensen’s new defense team has not made the same request, so his retrial will be held in Kenosha County, where publicity of the first trial was extensive, and many people knew the Jensens.

Of the first 80 jurors pooled on the first day of jury selection, only a handful were asked to return Tuesday for more questioning. The rest were excused, because of the length of the trial or because they had public knowledge about the case. 70 more people were summoned for day two of jury selection.

Jensen sat down for his first official interrogation in April 1999, four months after his wife’s death. That same year, Jensen married the woman he’d been having an affair with, Kelly (Labonte) Jensen.

Kelly Jensen was a key witness for the prosecution in the 2008 trial. She has since divorced Mark, but will return to testify for the State.

Bodies of missing Detroit rappers believed to have been found

Arrest made in 1987 murder of 82-year-old Florida woman