HOUSTON (AP) — The man accused of fatally shooting rapper Takeoff last month outside a Houston bowling alley sought information about using fake plane tickets to obtain an expedited passport in his efforts to flee the country, and repeatedly made online searches about whether he was a suspect in the case, prosecutors alleged during a court hearing Wednesday. 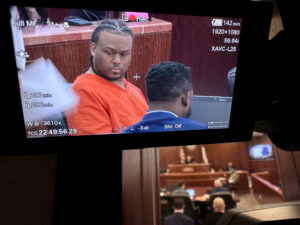 But attorneys for Patrick Xavier Clark, 33, say their client never had any intention of leaving Houston and he will likely pursue self-defense in the case, as he has asserted his innocence.

“We feel comfortable that when the time is right that Mr. Clark will have a valid and meritorious claim for self-defense,” Letitia Quinones, one of Clark’s attorneys, said after the hearing. She declined to provide additional details on this to reporters, but during the hearing, she suggested that Clark only fired after someone shot at him first. Police say Clark fired the first shot.

Takeoff was shot in the head and back as more than 30 people were leaving a private party at the bowling alley around 2:30 a.m. on Nov. 1. Houston police have said the gunfire followed a disagreement over a “lucrative” game of dice outside the bowling alley, but that the 28-year-old rapper was not involved and was “an innocent bystander.”

Clark was arrested on Dec. 1 on a murder charge.

During Wednesday’s hearing, Clark’s attorneys had sought to have his bond reduced from $2 million to $100,000. But state District Judge Josh Hill was initially hesitant to reduce his bond, believing he could be a flight risk and that Clark’s “Google searches for fake tickets cause me a great deal of concern.” 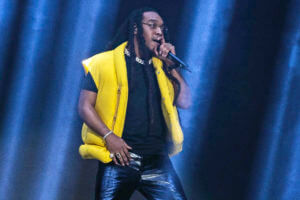 Takeoff of Migos performs at the Wireless Music Festival, Crystal Palace Park, London, England, on Sept. 12, 2021. Prosecutors allege the man accused of fatally shooting rapper Takeoff last month outside a Houston bowling alley sought information on how fake plane tickets could be used to obtain an expedited passport in his efforts to flee the country and repeatedly made online searches about whether he was a suspect. (AP Photo/Scott Garfitt, File)

During the hearing, Houston police Sgt. Michael Burrow testified that a review of Clark’s cell phone after his arrest found he had made online searches for fake plane tickets. Prosecutors suggested these searches were tied to Clark’s efforts to get an expedited passport. Investigators also found multiple searches on his cell phone in which Clark looked at news articles about the shooting and whether he was named as a suspect, he said.

“It was my belief he was preparing to flee the country,” Burrow said.

Surveillance video showed Clark was holding a wine bottle in one hand when he fired his gun, Burrow said. Clark left the bottle near the scene of the shooting and fingerprints found on the bottle were later used to identify him. FBI sources had also pointed to Clark as being at the shooting.

Quinones denied Clark was trying to leave the country after the shooting, saying that before his arrest he had canceled a previously scheduled trip to Mexico and that on the day of his arrest he had been looking for an apartment to rent in the city.

Hill agreed to reduce Clark’s bond to $1 million if additional security requirements could be met and he agreed to consider next week additional information from Clark’s lawyers about possibly lowering it more, possibly to $300,000. Quinones said she hopes Hill lowers the bond to $300,000 as anything higher cannot be afforded by Clark’s family.

Clark’s father, Joseph, testified that his son works as a DJ and also promotes night clubs but that he has never been financially stable, still lives at home, borrows his truck to get around and wouldn’t have the resources to flee to another country. 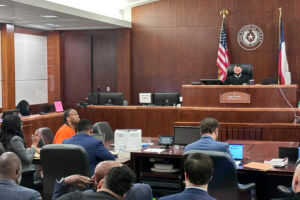 During the hearing, prosecutors played a recording of a call Clark made on Dec. 6 from jail to his family in which he could he heard saying that the $2 million bond “can be made right now.” Prosecutors suggested Clark has had access to large amounts of cash in his work as a DJ and with night clubs. But Quinones said Clark indicating he could pay the $2 million was just boastful claims from “a young man talking and talking too much.”

Police have said that during the shooting, another man and a woman suffered non-life-threatening gunshot injuries, and that at least two people opened fired. Police said investigators are still trying to track down witnesses. The gun used to kill Takeoff has not been recovered, Burrow said.