ST. PAUL, Minn. (AP) — Witness testimony will get underway in earnest Tuesday at the federal civil rights trial of three former Minneapolis police officers accused of failing to intervene as fellow Officer Derek Chauvin killed George Floyd by pressing his knee into the Black man’s neck as he lay facedown, handcuffed and gasping for air.

Former officers J. Alexander Kueng, Thomas Lane and Tou Thao are broadly charged with depriving Floyd of his civil rights while acting under government authority. Floyd, 46, died on May 25, 2020, after Chauvin knelt on his neck for 9 1/2 minutes. Kueng knelt on Floyd’s back, Lane held his legs and Thao kept bystanders from intervening.

Prosecutors and defense attorneys spent most of Monday laying out their cases to the jury during opening statements of the former officers’ trial, with prosecutors saying they will show that Kueng, Lane and Thao stood by as Chauvin “slowly killed George Floyd right in front of them.”

“We will ask you to hold these men accountable for choosing to do nothing and watch a man die,” said prosecutor Samantha Trepel, who works for the Justice Department’s civil rights division.

But it was Chauvin, the senior officer at the scene, who called “all of the shots,” one defense attorney told jurors, adding that the Minneapolis Police Department did too little to train officers to intervene when a colleague should be stopped.

Another officer’s attorney focused on Floyd’s struggle with police before they restrained him. And an attorney for the third officer said his client raised concerns about the restraint of Floyd, but was rebuffed. 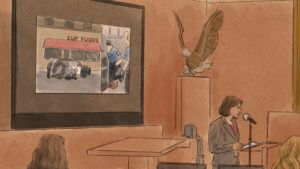 In this courtroom sketch, Samantha Trepel, who works for the Justice Department’s civil rights division, gives opening statements during the trial for three former Minneapolis police officers charged with violating George Floyd’s civil rights before U.S. District Judge Magnuson on Monday, Jan. 24, 2022 in St. Paul, Minn. Floyd, a Black man, was killed May 25, 2020 when Derek Chauvin pressed his knee against Floyd’s neck as Floyd, who was handcuffed, said he couldn’t breathe. (Cedric Hohnstadt via AP)

Chauvin was convicted of murder and manslaughter last year in state court in the videotaped killing that triggered worldwide protests and a reexamination of racism and policing.

Kueng, who is Black; Lane, who is white; and Thao, who is Hmong American, are all charged for failing to provide Floyd with medical care. Thao and Kueng face an additional count for failing to stop Chauvin, who is white. Both counts allege the officers’ actions resulted in Floyd’s death.

Trepel said videos will show that Thao stood directly next to Chauvin, but instead of intervening, taunted Floyd for using drugs, telling bystanders, “This is why you don’t” use drugs, and ignoring their pleas to check Floyd’s pulse.

The prosecutor said Kueng “never once” told Chauvin to get off Floyd, even after Floyd stopped struggling and Kueng could not find a pulse. Instead, she said, Keung remained kneeling on Floyd.

And she said that Lane “chose to do nothing” after Kueng and Chauvin rejected Lane’s suggestion to roll Floyd on his side.

Later, prosecutors began introducing video taken from Lane’s body camera that shows Floyd’s struggle with officers, Floyd being held on the ground and the arrival of paramedics. The video will come up again when testimony resumes Tuesday.

Tom Plunkett, Kueng’s attorney, highlighted the rookie status of his client and Lane, who were responding to a 911 call accusing Floyd of using a counterfeit $20 bill to buy a pack of cigarettes at a corner market. Thao and Chauvin responded as backup.

“You’ll see and hear officer Chauvin call all of the shots,” said Plunkett, who also said that Kueng and Lane were not trained in the department’s policy on neck restraint.

Lane’s attorney, Earl Gray, said Lane was at Floyd’s legs and could not see Chauvin’s knee on Floyd’s neck.

Lane at one point suggested that they use a restraint called the hobble on Floyd, which would have meant Floyd would have been on his side “and no doubt he’d be alive today,” Gray said. But he said Chauvin said no. Lane also suggested twice that they roll Floyd over, but was rebuffed, Gray said. 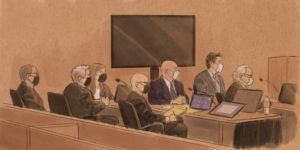 Gray also said Lane called an ambulance because of a cut on Floyd’s lip and later had another officer increase the urgency of the ambulance code. Gray noted that Lane got into the ambulance and helped perform chest compressions on Floyd.

Thao’s attorney, Robert Paule, said Floyd’s death was a tragedy, “however, a tragedy is not a crime.” He also said a widely watched bystander video of the arrest does not show everything, including Floyd struggling with officers who were trying to put him in a police vehicle.

Gray said Lane will testify, but it’s not known if Thao or Kueng will. It’s also not clear whether Chauvin will testify, though many experts who spoke to The Associated Press believe he won’t.

Lane, Kueng and Thao also face a separate state trial in June on charges they aided and abetted both murder and manslaughter.