BRUNSWICK, Ga. (Court TV) — Thea Brooks has long used fashion as an outlet for self-expression, designing T-shirts for special occasions and doing her own alterations to store-bought clothing.

When her nephew, Ahmaud Arbery, was gunned down in February 2020, Brooks poured her grief into creating wearable tributes to her beloved “Quez.”

“Posters can be ripped up, misplaced,” Brooks said in a phone interview from her home in south Georgia. “A piece of clothing sends a message.”

Sometimes called “R.I.P. t-shirts” based on the acronym, “rest in peace,” the commemorative clothing has become an extension of American mourning rituals and protest imagery.

The proliferation of face masks in the pandemic created a new vehicle for these wearable memorials as people took to the streets to mourn Arbery, George Floyd and other African Americans as part of the country’s racial reckoning. With the shirts and masks becoming more visible in public, especially in and around courthouses, lawyers are starting to question their potential impact on the rights of the accused in cases involving those being memorialized. 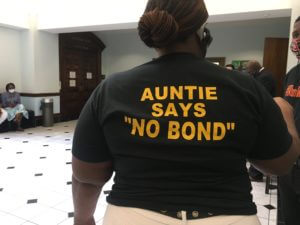 Brooks designed a variety of shirts and face masks using likenesses of Arbery from family pictures, a class photo and airbrushed portraits. For family members, Brooks made shirts with forceful statements that identified the wearer, such as, “Auntie Won’t Stop ‘Til The Guilty Verdict Drops.” Other designs included the hashtag #iRunwithMaud, which became a social media rallying cry amid reports that Arbery’s assailants chased him while he was jogging through a neighborhood near his home.

As weeks passed without developments in the case, Arbery’s family wore the shirts to protests and vigils demanding arrests.

They also wore them in everyday life — at church, the grocery store — to signal to the community that their fight continued after the cameras left, Brooks said. After three men were charged with Arbery’s murder, Brooks made new shirts for nearly each stage of the case with messages tailored to the occasion.

“It was a message to let them know we’re here to stay. I wanted people to know who I was, what I stood for and that my fight for Ahmaud was real,” Brooks said.

Scholars trace the origins of R.I.P. shirts to predominantly Black urban gangs in the 1980s as mourning wear that honored fallen members. News reports in the 1990s documented the growing visibility of R.I.P. shirts in urban communities with high rates of violence, creating a cottage industry. The deaths of rappers Tupac Shakur and Notorious B.I.G. in the late 1990s brought R.I.P. shirts to the masses and their popularity grew among the African American community in particular, according to Dr. Kami Fletcher, an associate professor of American and African American history at Albright College. 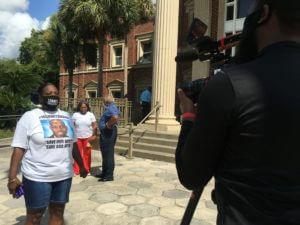 “R.I.P. shirts show the larger society that African Americans are securely grounded in families and families that not only love the decedents but value them,” Fletcher wrote in a chapter on R.I.P. T-shirt culture in the anthology, “Beyond the Veil: Reflexive Studies of Death and Dying,” published in 2021.

The proliferation of imaging and printing technology has made mass production of these shirts possible while still allowing for small batch runs among individuals like Brooks and street-level entrepreneurs, according to Katie Kavanagh O’Neill, an independent researcher who received a PhD in Rhetorical and Cultural studies at the University of Pittsburgh.

At George Floyd Square in Minneapolis, vendors offer a variety of T-shirts featuring Floyd and other victims of police violence. Outside the Georgia courthouse that hosted pretrial hearings for Arbery’s killers, individuals sold shirts from the hoods of their cars in the parking lot.

Selling R.I.P shirts raises ethical questions about profiting off death. Brooks said the family has received some money from the sale of shirts with her nephew’s image from courthouse vendors. But she didn’t care to police the use of his image, she said, “because the focus was justice, and the support was beautiful.”

The R.I.P. shirts raise questions about potential threats to the rights of the accused, especially as they get closer to the courtroom. Judges typically bar clothing or signage from the courtroom gallery during the trial to avoid prejudicing the jury toward either side.

“The courtroom isn’t the place for public advocacy,” said attorney Lee Merritt, who represents Wanda Cooper-Jones, Arbery’s mother. “The gallery shouldn’t have any influence on the jury so if you’re wearing shirts or face masks and that can be compelling to the jury regarding the issues at hand – those kinds of signages traditionally haven’t been allowed.” 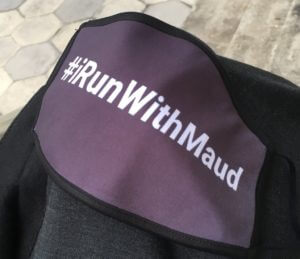 #iRunwithMaud became a social media rallying cry amid reports that Arbery was on a jog when he was gunned down.

Merritt, however, was the subject of a defense objection for wearing R.I.P. apparel during the first court appearance of the men accused in Arbery’s death. In June 2020, with the pandemic in full swing and Floyd’s death still fresh, Arbery’s supporters passed out masks to members of the public entering the courthouse, some bearing Floyd’s name, others stamped #iRunwithMaud.

Judge Timothy Walmsley overruled the defense’s objection to letting Merritt and Cooper Jones wear the masks in the courtroom. From that point, Merritt and Arbery’s family stopped wearing R.I.P. apparel in the courtroom, but still donned the shirts to watch proceedings in the overflow room that was set up to accommodate social distancing restrictions.

“The attorneys did say that shirts or anything with Ahmaud couldn’t be worn in the courtroom because of trying to have a fair trial for the defendants,” Brooks said. Those limits did not apply to the overflow room where Brooks watched proceedings with the rest of her family and their supporters.

Lawyer Kevin Gough, who represented the McMichaels’ co-defendant, William Roddie Bryan, raised the issue a handful of times during the trial as part of objections to Arbery supporters in and around the courthouse. Even though they weren’t in the courtroom, Gough argued the jury may catch glimpses of them and their pro-Arbery attire in the hallway or on their way out of the courthouse. Again, Walmsley overruled the objection, saying the jury had not indicated they were affected by their presence.

“We believe that the purported First Amendment activity inside the courthouse was unduly prejudicial whether the jurors saw that conduct or not, because it contributed to the oppressive atmosphere within which the trial was conducted,” Gough told Court TV.

The issue made it all the way to the U.S. Supreme Court in 2006 in Carey v. Musladin. The high court left the power with state courts, saying a judge has the right to prohibit such attire if it does not deprive a defendant of his Sixth Amendment right to an impartial jury.

As 2022 brings more high-profile trials for the deaths of African Americans, including the three former Minneapolis police officers involved in Floyd’s death, it remains to be seen if R.I.P. apparel will bring more objections. Nevertheless, according to Fletcher, the Albright College historian, R.I.P. shirts will continue to be a vehicle for African Americans to reclaim the narrative surrounding deaths of loved ones throughout the trial process. 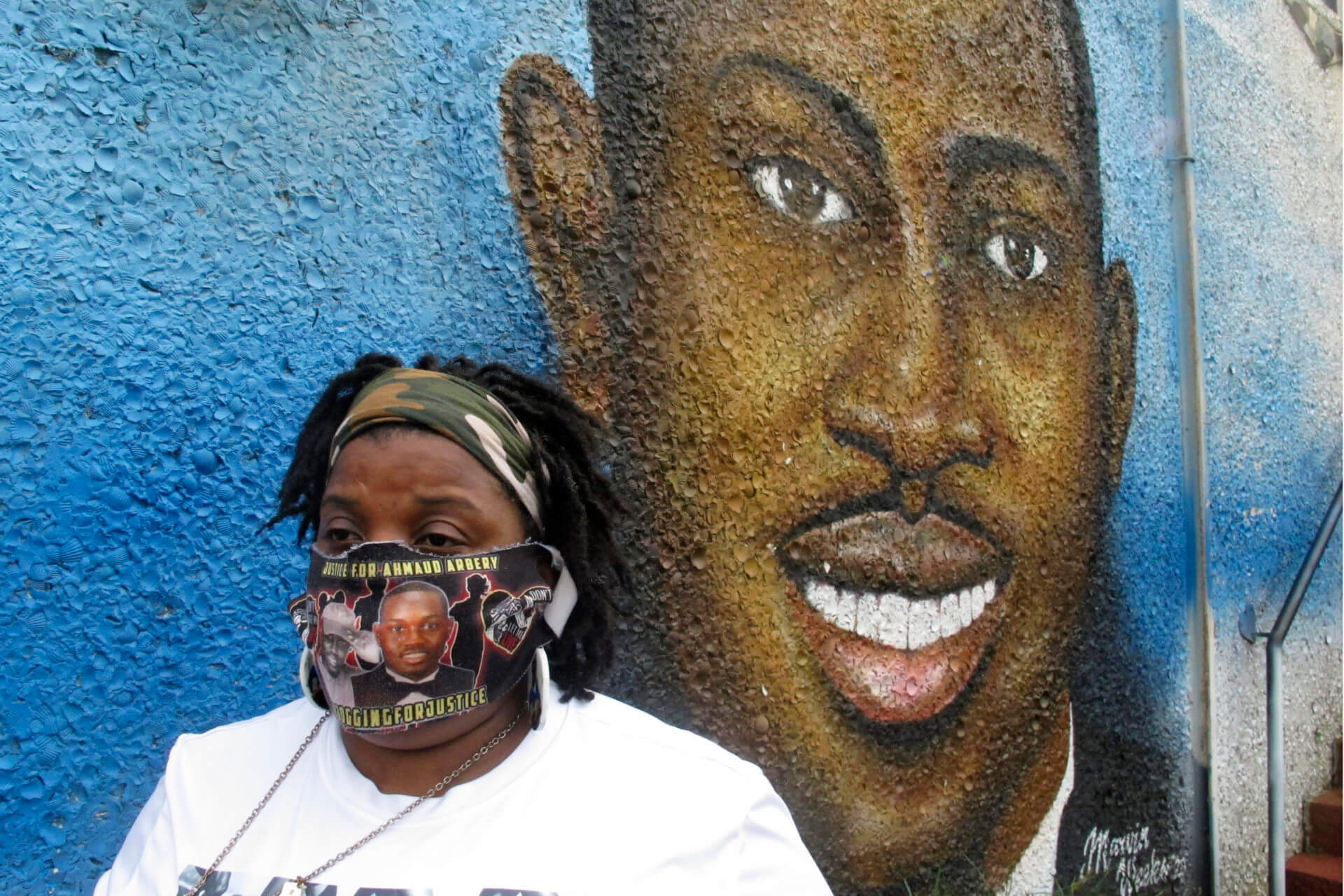 Thea Brooks stands in front of a mural of her slain nephew, Ahmaud Arbery, in Brunswick Ga., Oct. 5, 2021. Brooks, who calls the killing a "modern-day lynching," will join other family members as trial proceedings begin for three white men charged with murder in the February 2020 slaying of the 25-year-old Black man. Jury selection in the case is scheduled to begin Monday, Oct. 18. (AP Photo/Russ Bynum)
MORE NEWS