Do laws punishing state electors for failing to vote along with the popular vote violate the First Amendment? That’s one of the questions the Supreme Court of the United States will hear arguments for on May 13.

In 2016, Colorado State Electors Polly Baca, Robert Nemanich and Michael Baca were required to vote for former Secretary of State Hillary Clinton, who had won the state. None of the three electors wanted Clinton for president, but Polly Baca and Nemanich voted for her while Michael Baca cast his vote for then-Ohio Governor John Kasich.

Michael Baca told media outlets, “I’m a former United States Marine. This isn’t about the party. This is about my country. I’m putting my country above my party and personal risks.”

After the vote, the first two filed a lawsuit challenging the ‘Faithless elector’ law, citing they felt “intimidated and pressured to vote against their determined judgement.”

Michael Baca was ultimately removed from the state’s electoral college.

He then sued, and his case went up to the Tenth U.S. Circuit Court, which ruled in his favor.

Colorado Attorney General Phil Weiser then appealed the case to SCOTUS. Weiser said, “If this law is upended and electors are acting as free agents, then people lose the will of voting for who they want.” 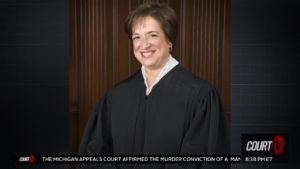 Now, this unresolved legal issue from the 2016 presidential election could have an impact on the electoral college in this year’s presidential battle.

NPR legal affairs correspondent Nina Totenberg says, “The question is, whether that is violation of the Constitution, and if it is, it could open the door to all kinds of shenanigans and I suspect even the potential for political pressure on people to change who they’re going to vote for, especially in a very close election.”

SCOTUS Justice Sonia Sotomayor has rescued herself from the case, citing “her impartiality might be reasonably quested due to her friendship with respondent Polly Baca.”