LAS VEGAS (AP) — An ex-convict who led police on a chase around Las Vegas before officers found the severed head and dismembered body of his friend in a stolen vehicle he was driving was sentenced last week to at least 18 years in prison. 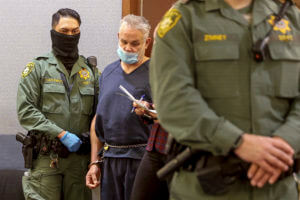 FILE – Eric Holland appears in court at the Regional Justice Center in Las Vegas, Dec. 28, 2021. Holland, who is accused of cutting up a body and storing it in a stolen car, was then ordered held without bail. Holland was sentenced Thursday, Dec. 1, 2022 to 18 to 45 years in prison for killing and dismembering a man whose severed head was found by police in a stolen pickup truck he was driving about a year ago in Las Vegas. Holland declared himself truly remorseful about the shooting death of his friend, Richard P. Miller. (K.M. Cannon/Las Vegas Review-Journal via AP, File)

Eric John Holland said he was “truly remorseful” for killing Richard P. Miller, whose remains were found in coolers in the bed of a Chevrolet Avalanche in which Las Vegas police stopped Holland last December. Authorities found that Miller had been shot several times, including at least once in the head, before his body was carved up.

“It’s a terrible thing that happened and I’m just so sorry,” Holland said.

That provided little comfort to Miller’s daughter, who tearfully and haltingly told a judge she felt “very little relief,” that Holland pleaded guilty in July to a reduced charge and avoiding trial on an open murder charge that could have resulted in a life sentence behind bars.

“I don’t know how to make sense of it,” sobbed Amanda Dawn Potter, who traveled from Portland, Oregon, for Holland’s sentencing. She called her father’s slaying “the most bizarre thing to ever happen to my family.”

“My dad didn’t deserve this,” she said.

Holland, 58, has an extensive criminal history, mostly for forgery and embezzlement, but also including an attempted prison escape in Texas.

Before Clark County District Court Judge Tierra Jones sentenced him to 18 to 45 years for second-degree murder and felony theft, Holland said he hoped authorities would continue to investigate his motive for killing Miller.

“I was going to bring it up in court, but I’m not going to because of family members,” Holland said. “There was a reason, and I hope that they’ll get closure today.”

Holland’s attorney, Daniel Westbrook, told the judge he would not say more than what his client said. Westbrook declined additional comment after the sentencing hearing.

Holland was friends with Miller, 65, who lived on a houseboat at Lake Mead, the Colorado River reservoir about a 30-minute drive from Las Vegas.

Miller was reported missing in November 2021, and investigators later determined he was killed during an argument with Holland. 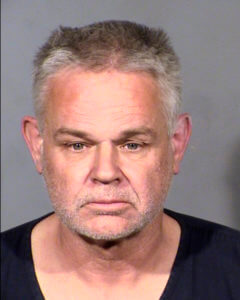 FILE – This Clark County, Nev., Detention Center photo provided by the Las Vegas Metropolitan Police shows Eric Holland, following his arrest on Dec. 23, 2021, in Las Vegas. Holland, as 58-year-old ex-convict was sentenced Thursday to 18 to 45 years in prison for killing and dismembering a man whose severed head was found by police in a stolen pickup truck he was driving about a year ago in Las Vegas. Holland declared himself truly remorseful about the shooting death of his friend, Richard P. Miller. (Las Vegas Metropolitan Police Department via AP, File)

The Las Vegas Review-Journal reported that in jailhouse interviews, Holland said he wanted police to investigate whether Miller was responsible for the disappearance of Miller’s ex-wife, Jing Me Zhu, in 2018 or 2019.

“I’m going to prison for the rest of my life, and I just want to make sure that she wasn’t forgotten,” Holland told the newspaper.

Holland said he believed Zhu lived in China and Canada before marrying Miller in 2018. In divorce proceedings less than a year later, Miller alleged in court documents that Zhu left him and moved to China. Records showed that Zhu could not be located to receive a court summons.

Westbrook told the newspaper that Holland believes Zhu is dead and that Miller killed her.

Holland did not provide details of Miller’s death, the Review-Journal reported.

Las Vegas police said they had no missing person investigation related to Zhu.

Police previously said Holland drove away from patrol officers trying to stop him on Dec. 23, 2021, in a stolen pickup truck and that he was seen switching vehicles before he was arrested in the second vehicle by officers who tracked him to an apartment complex west of the Las Vegas Strip.

Police later found receipts in the vehicles for items including a power saw and trash bags purchased from a home improvement store after Miller’s disappearance.

Holland had been sought since May 2019 on an arrest warrant in a 2018 case in Las Vegas accusing him of embezzlement, identity theft, issuing false checks and theft, according to court records. He had posted $5,000 bail in that case.

Holland had prior felony convictions dating to 1987 in California for embezzlement, assault with a deadly weapon, resisting arrest causing substantial bodily harm and property theft and false identification, according to a Las Vegas prosecutor, prison and court records.

Records show that Holland was convicted in Texas in a federal counterfeiting case, and later of attempted escape and aiding in an escape.