WEST PALM BEACH, Fla. (WPTV) — A Florida couple may have abused and locked up their 14-year-old adopted child in a small garage structure because the teen had an attachment disorder with his parents, a defense attorney argued in court Wednesday.

Tracy and Timothy Ferriter, both 46, were arrested for aggravated child abuse and false imprisonment.

A judge set their bond at $50,000 and ordered them to have no contact with their four children unless it’s authorized by the Florida Department of Children and Families.

Hours later, the couple was released on bond.

Jupiter police said the Ferriters forced their 14-year-old adopted son to live in an 8-foot by 8-foot structure in the couple’s garage for years. 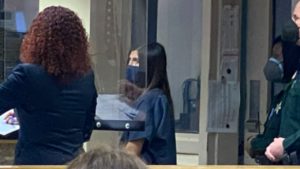 The structure had a mattress, bucket and camera inside.

Detectives said the Ferriters had been physically abusing and forcibly confining the teen to live in the garage structure since at least 2017.

The 14-year-old was able to attend school, but was locked up during the remainder of the day while at home, police said. Meals were brought to him and a bucket was provided for bathroom use.

In court Wednesday, defense attorney Nellie King presented documents to Judge Charles Burton that suggested the teen had reactive attachment disorder, a condition in which a child doesn’t form a healthy emotional bond with his or her caretakers.

The documents claimed that disorder may be a reason why the Ferriters locked their son up.

According to a newly released arrest report, Jupiter police first made contact with Tracy Ferriter on Jan. 28 after she had reported her son missing. Ferriter told police her son “has several behavioral disorders” and was in trouble at school the day before.

Two days later, officers went to the Ferriter’s home to see if the 14-year-old had returned, but he had not. Ferriter gave officers permission to enter the home.

In the garage, officers found a structure — described as a “small room with a plain white door” — that Ferriter said the family had built for their son. The door had a deadbolt, which could lock it from the outside.

Inside the room was a box spring and mattress with a gray sheet and pillow, and a desk with school books, children’s books, and a chair. There was a Ring camera mounted above the mattress.

The arrest report stated that officers located the 14-year-old on the campus of Independence Middle School in Jupiter on Jan. 31. The teen told officers his parents lock him in the structure “a lot,” saying he was once locked in the room for up to 18 hours.

According to the report, when officers asked him why he ran away, he said “because I feel like no one loves me” and he did not feel safe at home.

The teen then pleaded with officers to arrest him, saying “he would rather be in prison than be back at home.”

On Feb. 1, police questioned one of the boy’s siblings who said the 14-year-old gets locked in the structure when he’s misbehaving or in trouble.

Police executed a search warrant on the Ring camera and found thousands of videos which showed then teen being locked inside the structure every day, the arrest report stated.

Three other children who were living in the Ferriters home — the youngest of whom is 2 — were removed by DCF. There was no mention of possible abuse against the couple’s other children.

The Ferriters lived in Jupiter for 16 years before moving to Arizona for four years. They had recently moved back to Palm Beach County.

This story was originally published Feb. 9, by WPTV in West Palm Beach, an E.W. Scripps Company.