MILWAUKEE (AP) — The high winds forecasters warned about are blasting down Wisconsin Avenue, but 15 grandmothers lining up in the street are ready to march.

They’re dressed for this morning’s parade in wide-brimmed hats held on tight with elastic chin straps. They’ve subbed out red pom poms for white ones so the dye won’t run in rain that is teasing its return from a leaden November sky. 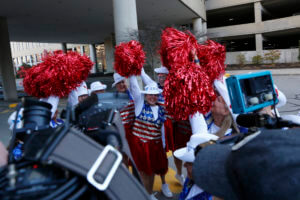 Kathi Schmeling, center, raises a pompom with other members of the Milwaukee Dancing Grannies before a performance at Aurora St. Luke’s Hospital in Milwaukee on Thursday, Sept. 3, 2022. As a way of saying “thank you,” the Grannies performed for a neurosurgeon and other medical staff who helped save and rehabilitate Betty Streng, a member of the Dancing Grannies who sustained a serious brain injury when the driver of an SUV struck her and dozens of others at a Christmas parade in Waukesha, Wis., last November. Six people were killed, including three Grannies and one group member’s husband. (AP Photo/Martha Irvine)

“This is like my calling,” says Kathi Schmeling, a retired human resources assistant, her grin framed by the crimson lipstick that is a signature of the women who call themselves the Milwaukee Dancing Grannies. “This is my happy place.”

Given where they’ve come from, it’s no small accomplishment that they’re here at all.

A year ago, a driver plowed an SUV through a Christmas parade in the nearby suburb of Waukesha, killing six people and scarring many more. Four of the victims were from the Dancing Grannies, including their longtime leaders, threatening to extinguish the tight-knit band of women — not old, they say, just well-seasoned — first drawn together by the aerobics craze of the 1980s.

Somehow, they held on. They drew on resilience banked well before the tragedy, during bouts with cancer and divorce, the loss of jobs and loves ones. They accepted that to keep going would require taking a risk on new ways of doing things, with new dancers who had not lived their history.

Soon, though, the calendar will come full circle. And to keep moving forward, the group has made a decision. When the parade returns to Main Street in Waukesha, they need to go back.

That day a year ago, eight women were slated to march through Waukesha’s cozy downtown, where the annual Christmas parade, cancelled the previous year because of the pandemic, had returned with a new theme: “Comfort and Joy.”

Families thronged Main when the Grannies funneled into the procession behind a Girl Scout troop and a youth dance corps. At 4:38 p.m. they sauntered through an intersection to a crowd favorite, Winter Wonderland, swinging pom poms skyward.

In the din, they didn’t hear the red SUV plowing down Main until it hit them.

A few feet from the curb, group leader Ginny Sorenson lay dead. Hurled to the sidewalk, the bodies of Leanna Owen and Tamara Durand, both killed instantly, would not be identified until hours later.

Nearby, the husband of another Granny who was a regular volunteer, lay bruised and battered, and succumbed to his injuries the following day. Down Main, an 8-year-old who had been parading with his Little League team and a 52-year-old woman marching with co-workers from a local bank were also killed.

Wandering through the chaos, Schmeling found fellow dancer Sharon Millard, a teacher’s aide so invested in the group that she had called to sign up the night before the birth of her first grandchild.

“Kathi!” she said, dazed. “What’s going to happen to the Grannies?” 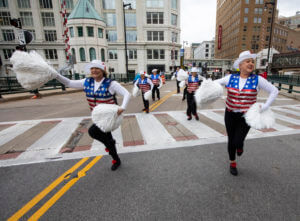 Colleen Minisce, left, and Janet Polley, right, and other members of the Milwaukee Dancing Grannies perform by at a Veterans’ Day parade on Saturday, Nov. 5, 2022, in Milwaukee. The Grannies have recently added several new members, including Minisce and Polley, as they’ve rebuilt after tragedy hit last year at a Christmas parade in Waukesha, Wis. Three Dancing Grannies and one group member’s husband were among those killed when the driver of an SUV struck them on the parade route. Dozens more, including some Grannies, were injured. (AP Photo/Kenny Yoo)

The days and weeks after the parade were filled with doubt. Several dancers were injured, including 64-year-old Betty Streng, comatose for five days afterward with a double skull fracture.

Others nursed hidden scars. One granny kept replaying the choice she’d made to dance on the left side of the formation — leaving Durand a few feet to her right, in death’s path. Another, at work, broke down when “Winter Wonderland” played over the school intercom.

Yet it seemed like they owed it to those who’d died to keep the group going, or at least to try.

When they reconvened in late January, 34 hopefuls showed up, forming a dance line that circled the tables of a fraternal hall.

Some peeled away in the weeks that followed, reluctant to commit to months of practices and more than 20 parades a year. A few veterans, taxed by memories, retired.

Early on a frigid Saturday the Original Grannies marched again for the first time in a Milwaukee St. Patrick’s Day procession, new arrivals wearing sashes identifying them as trainees walked alongside.

By spring’s end, the Grannies — increasingly seen as an embodiment of the region’s “Waukesha Strong” motto — were fielding parade invites from around the state. In town after town, spectators shouted their thanks for the group’s return, shaping hearts with outstretched hands.

“It’s bittersweet at times,” Jeannie Knutson, one of the Original Grannies, recalls thinking. “I mean, before the tragedy you’d have crowds clapping and singing along, but now it’s totally different.”

In October arrived, the terrifying memories of Waukesha were revived in a Milwaukee courtroom. 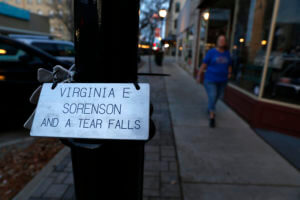 A plaque honoring Virginia “Ginny” Sorenson rests on a lamp post on Thursday, Nov. 3, 2022, along Main Street in Waukesha, Wis., as Donna Kalik walks nearby. Sorenson was a leader and member of the Milwaukee Dancing Grannies who was killed when the driver of an SUV sped through a Christmas parade in Waukesha last November, killing six and injuring dozens of other people. There is a plaque for each of the dead along the parade route. Several new members have joined the Grannies since the incident, including Kalik, who has become the group’s volunteer coordinator. She was at the parade last year and felt compelled to support the Grannies. “It was like a war zone,” she said of the scene the driver left in his wake. (AP Photo/Martha Irvine)

“I didn’t want to hear about it,” says Schmeling, recalling the anger that welled up inside when she recounted her memory of Waukesha for prosecutors before the trial. “I’m done with that chapter.”

The driver, Darrell Brooks, was convicted of all 76 counts against him, and sentenced to life in prison.

With that resolution behind them, the Grannies, old and new, hope that going back will bring comfort, proof that the recovery of the past year is permanent.

They move to the message Ginny Sorenson long preached.

“Ginny always had this saying before parades: ‘If you make a mistake, if you get off kilter, if you drop your pom poms, no matter what, you keep on dancing,’” says Jan Kwiatkowski, one of the new leaders of the Grannies. 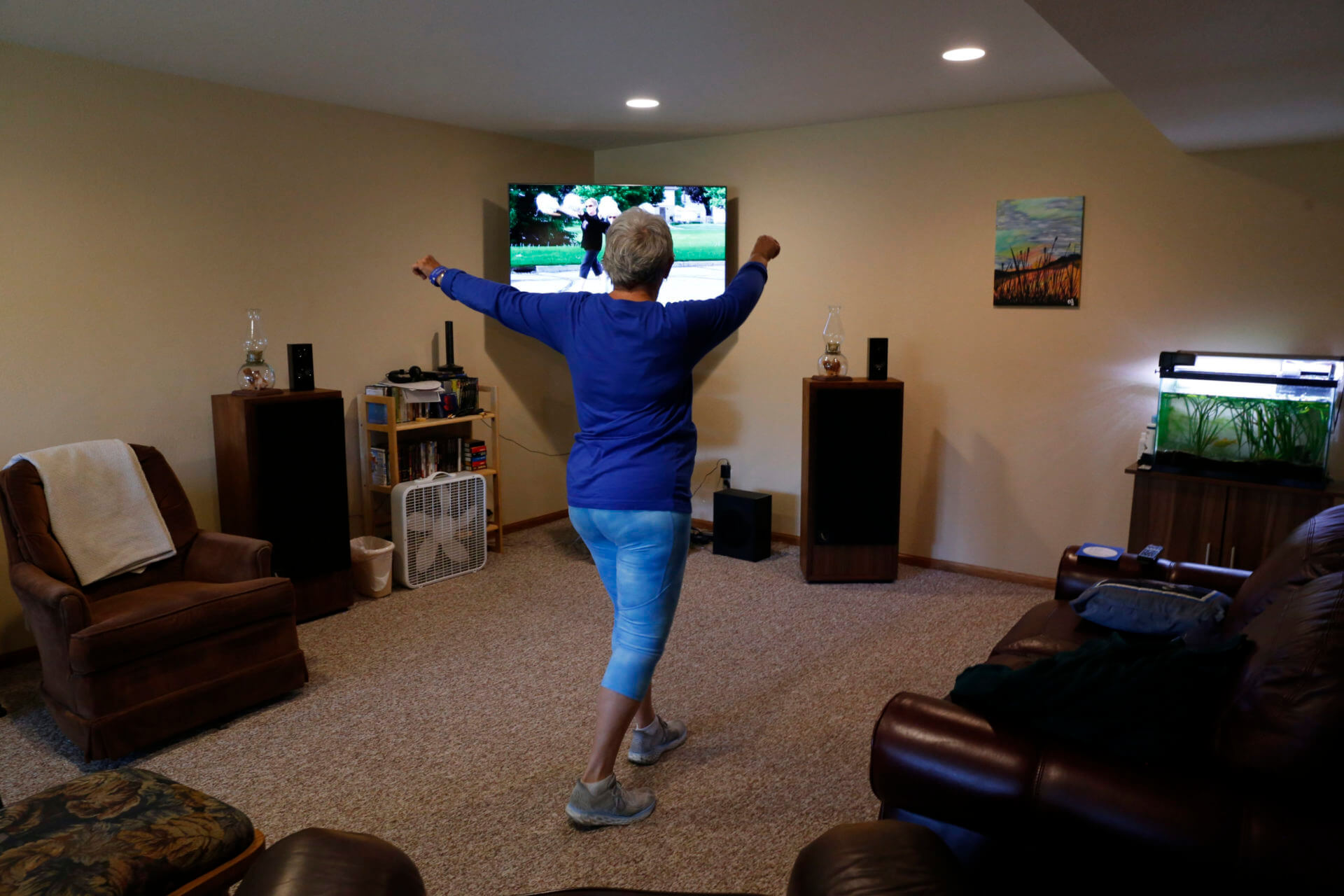 Betty Streng practices with a video of the Milwaukee Dancing Grannies at her home in Greenfield, Wis., on Wednesday, Nov. 2, 2022. Streng, 64, nearly died from a serious brain injury when the driver of an SUV struck her and dozens of other people at a Christmas parade last November in Waukesha, Wisconsin. Still a Dancing Granny, Streng has made a remarkable comeback — and is performing again with her teammates. “Why would I not go back? Why would I limit my life because I'm afraid of something?” she asked. (AP Photos/Martha Irvine)
MORE NEWS