“I don’t think that we disagree that there were false statements made,” Brittany Paz testified at a civil trial involving Jones’ claims that the nation’s deadliest school shooting was a hoax concocted as a pretext to tighten gun regulations. 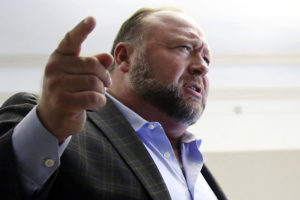 FILE – Alex Jones talks to media during a midday break in his trial at the Travis County Courthouse in Austin, Texas, on July 26, 2022. A six-member jury with several alternates in Connecticut will begin hearing evidence, Tuesday, Sept. 13, 2022, on how much Jones should pay the families, since he already has been found liable for damages to them. The trial is expected to last about four weeks. (Briana Sanchez/Austin American-Statesman via AP, Pool)

Asked whether an Infowars headline that suggested the massacre was a “false flag” operation was itself untrue, Paz said she didn’t disagree it was false.

The jury is tasked only with determining what Jones has to pay to eight victims’ families and an FBI agent — a judge already found the Infowars host liable for damages, by default. She made that determination after he failed to turn over documents as ordered during the lawsuit.

Jones is expected to testify eventually but hasn’t attended the trial so far. On his Infowars web show Wednesday, he called the proceeding a “show trial” meant to squelch dissent.

“It’s just X-level insane,” added Jones, who has cast the case as part of a dark campaign against him, his audience and Americans’ free speech rights. The trial comes about a month after a Texas jury ordered him to pay nearly $50 million to the parents of a child killed at Sandy Hook.

Jones’ lawyer, Norm Pattis, has urged the Connecticut jury to keep any damages minimal, arguing that the families are making overblown claims of harm.

The families say the emotional and psychological harm was serious, deep and persistent — social media harassment, death threats, strangers videotaping them and their children, and the surreal pain of being told that their loss wasn’t real.

Her sister, teacher Vicki Soto, was among the 26 people killed in the 2012 carnage at Sandy Hook Elementary School in Newtown, Connecticut. Twenty victims were children.

Soto Parisi described seeing social media comments claiming that she was a crisis actor, that her sister wasn’t shot or didn’t exist, and that the massacre never happened. She testified about getting ominous social media messages with gun emojis and a note on her door from a stranger saying she needed to go to church.

And one time, she said, a conspiracy theorist showed up and shouted, “This never happened!” at a fundraising run that the family holds in Vicki Soto’s honor.

The families argue that Jones trafficked in lies to boost his audience and, with it, customers for Infowars merchandise. Google Analytics data shown in court Wednesday charted spurts in people viewing his websites and social media accounts after he started talking about Sandy Hook.

By 2016, Jones’ show aired on 150 affiliate radio stations, and the Infowars website got 40 million page views a month, according to data that the company used to pitch advertisers. Paz, whom the defense hired to testify on the company’s workings, said she believes Jones has made hundreds of millions of dollars in the decade since the Sandy Hook slayings.

Jones now acknowledges the shooting was real. At the Texas trial, he testified that he realizes what he said was irresponsible, and he apologized.

He insists, however, that his comments were protected free speech.

“I don’t apologize for questioning it,” he said on his show Wednesday. “I apologize if, out of context, I hurt somebody’s feelings.”