HOUSTON (AP) — Cases can move forward against Alex Jones regarding the nearly $1.5 billion he’s ordered to pay families of Sandy Hook victims over his conspiracy theories about the 2012 school massacre, a federal bankruptcy judge ruled Monday, but the families can’t yet pursue collection efforts against the Infowars host. 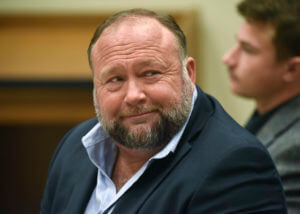 FILE – Infowars founder Alex Jones appears in court to testify during the Sandy Hook defamation damages trial at Connecticut Superior Court in Waterbury, Conn., on Sept. 22, 2022. A federal bankruptcy judge on Monday, Dec. 19, allowed cases to move forward regarding the nearly $1.5 billion Jones has been ordered to pay to families who sued him over his conspiracy theories about the Sandy Hook school massacre. (Tyler Sizemore/Hearst Connecticut Media via AP, Pool, File)

Judge Christopher Lopez approved an order that attorneys for Jones, his media company and the Sandy Hook families had all agreed to. The order lifts a stay that automatically halted the cases when Jones filed for bankruptcy. Free Speech Systems, Jones’ media company, is also seeking bankruptcy protection.

Lopez approved the order, which prevents the families from pursuing collection efforts, during an hour and a half long hearing that Jones attended remotely.

Jones filed for Chapter 11 personal bankruptcy protection earlier this month in Texas, citing $1 billion to $10 billion in liabilities and $1 million to $10 million in assets.

For years, Jones described the 2012 Sandy Hook massacre as a hoax. A Connecticut jury in October awarded victims’ families $965 million in compensatory damages, and a judge later tacked on another $473 million in punitive damages. Earlier in the year, a Texas jury awarded the parents of a child killed in the shooting $49 million in damages.

Jones has laughed at the awards on his Infowars show, saying he has less than $2 million to his name and won’t be able to pay such high amounts. Those comments contradicted the testimony of a forensic economist at the Texas trial, who said Jones and Free Speech Systems have a combined net worth as high as $270 million.

In documents filed in July in Free Speech Systems’ bankruptcy case in Texas, a budget for the company for Nov. 26 to Dec. 23 estimated product sales will total nearly $3 million, while operating expenses will be nearly $739,000. Jones’ salary is listed at $20,000 every two weeks.

Lopez on Monday delayed taking up a motion by Jones’ attorneys to force Free Speech Systems to pay the $1.3 million listed under his contract, which would amount to about $54,000 every two weeks. Lopez said he will take up the issue at a hearing next month.

Sandy Hook families have alleged in another lawsuit in Texas that Jones hid millions of dollars in assets after victims’ relatives began taking him to court. Jones’ lawyer denied the allegation.

A third trial over Jones’ comments on Sandy Hook is expected to begin within the next two months in Texas, in a lawsuit brought by the parents of another child killed in the shooting.