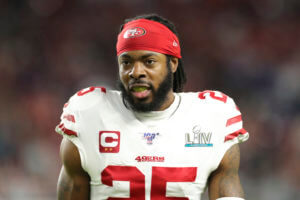 King County District Court Judge Fa’amomoi Masaniai found probable cause Sherman committed criminal trespassing, malicious mischief, driving under the influence and resisting arrest. Prosecutors did not ask the judge for a finding on a felony residential burglary allegation for which he was initially booked. They have not yet filed charges.

Masaniai declined to set $10,000 bail as prosecutors requested. The judge called Sherman, who did not attend the hearing, a “pillar of the community” and noted it was presumed he would be released because this was his first arrest. He ordered Sherman not have contact with his father-in-law and not use alcohol or nonprescription drugs.

“I love and support my husband,” Sherman’s wife, Ashley Sherman, said in a statement after the hearing. “I am committed to helping Richard get the support and care that he needs. Richard has always been a loving father and husband. And we are looking forward to seeing him at home with his family.”

Sherman was belligerent, had been drinking heavily and had spoken of killing himself when he left his home in the Seattle suburb of Maple Valley late Tuesday, according to police reports. Ashley Sherman called 911 to try to have police stop him.

He was arrested early Wednesday after police said he crashed his car in a construction zone along a busy highway east of Seattle and then tried to break into his in-laws’ home in the suburb of Redmond.

His father-in-law, Raymond Moss, told officers he armed himself with a handgun and fired pepper-spray at the NFL cornerback to protect his family as Sherman tried to bust in the door with his shoulder.

As she spoke with a 911 operator, another daughter of Moss pleaded for officers to arrive quickly and told her children to hide in a bathroom behind a shower curtain, according to audio of the call released Thursday.

“The family began to yell in fear,” Moss told police. “I used pepper spray on Sherman’s face through the partially opened door as he was still banging and attempting to gain entry. I told him to stop. I armed myself with my handgun at this time, fearing for the safety of myself and my family.”

Officers were cautious about arresting Sherman due to his size, strength and belligerence, according to police reports released Thursday. After attempting to deescalate the situation, they decided to use less-lethal force after warning Sherman that they would if he didn’t comply with their orders.

They could not use a Taser because they worried about igniting whatever chemical Sherman’s father-in-law had sprayed him with and could not fire a bean-bag round because they were too close to him. Instead, they released a police dog, which bit his ankle and caused a minor cut, as other officers wrestled with him on the ground, the reports say.

In February, King County prosecutors and the sheriff obtained an “extreme risk protection order” for Sherman, which barred him from having guns after a judge determined he posed a danger to himself or others. Details of the case were sealed, and it was not immediately clear if any weapons had been seized from him.

Ashley Sherman told police her husband was on anti-depressants and was receiving mental health counseling.

At Thursday’s hearing, Sherman’s attorney, Cooper Offenbecher, did not contest that probable cause existed for the arrest. But he said Sherman should be released without bail, noting his good works in the community, including founding the Blanket Coverage Foundation, a charity that provides low-income students with school supplies and clothes.

“Richard Sherman is among the best in our community,” Offenbecher said. “He is a good person and a good soul. He is taking these allegations very seriously.”

Sherman, 33, became a Seattle sports legend during seven seasons with the Seahawks. The cornerback was a star in their run to a 2014 Super Bowl victory, making a game-saving play to deflect a pass in the NFC Championship Game against the 49ers.

He left the Seahawks after the 2017 season and played three seasons with San Francisco. He is now a free agent.