OCALA, Fla. — Jurors in Bo Pete Jeffrey’s first-degree murder trial heard audio of the defendant admitting to investigators that he hid his ex-wife’s dead body in their camper. But Jeffrey stopped short of confessing to killing Lisa Jeffrey, insisting he found her dead body in the bathroom on November 6, 2018 – the morning after her 48th birthday – and panicked.

The police interview – recorded on December 4, 2018 – capped the first day of testimony in Jeffrey’s trial in Ocala, Florida. Prosecutors are expected to play more incriminating statements from the defendant on Wednesday, including his alleged admission to beating Lisa Jeffrey the night of her birthday. 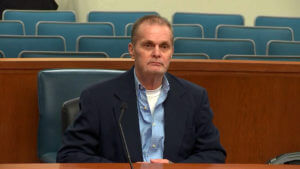 This photo shows defendant Bo Pete Jeffrey in court ahead of opening statements on July 13, 2021. Jeffrey is accused of fatally beating his ex-wife and faces life in prison if convicted of first-degree murder. (Court TV)

Prosecutors showed video of the defendant buying 42-gallon trash bags from a Rural King store in Ocala on November 7, 2018, around 9:10 a.m., the same type of bag used to conceal Lisa Jeffrey’s body in a storage drawer under a bed in the couple’s camper.

Jeffrey was a “complete mess” when he made the incriminating statements to law enforcement, defense lawyer Jervis Wise said Tuesday in his opening statement. Lisa Jeffrey’s death was tragic, Wise said, but he insisted it was not due to the defendant’s intention to kill her. Wise said the evidence shows it’s unclear how Lisa Jeffrey died or if the defendant’s actions caused her death. Above all, Wise said his client did not intend to kill his ex-wife.

Prosecutor Rich Buxman said in his opening statement that the defendant’s own words prove otherwise. “I was actually waiting for Lisa to die of natural causes because I hated her so bad,” Buxman quoted the defendant as saying in the police interrogation we expect to hear Wednesday. “I put a wild sally on her… I put the shit on her… beat the fuck out of her.” In the police interrogation jurors heard on Tuesday, the defendant said he woke up on November 6, 2018, to find his ex-wife dead on the “commode” after punching her in the head three to four times the night before. Buxman told jurors the evidence would prove the defendant’s actions were far more severe, and Jeffrey intended to beat Lisa Jeffrey to death, referring to the element of premeditation underlying the sole charge of first-degree murder Jeffrey faces.

Lisa Jeffrey’s daughters and aunt testified on Tuesday that the defendant lied to them about their mother’s whereabouts for weeks following her disappearance. Jamie Curl said Jeffrey told her that her mother had run off the morning after her birthday. Curl acknowledged her mother struggled with illegal drugs, and it was common for her to leave home. But Curl said it was unusual for her to not receive a phone call from her mother nearly daily. Paris Riley testified her mother’s relationship with Jeffrey started well, so much so that Riley considered him a father figure when she lived with them. But Riley said the relationship took a turn when Jeffrey started drinking, and he became physically abusive to Lisa, beating and punching her on the arms and legs with such force his horseshoe ring left a mark on her skin. Riley described a specific instance when she witnessed Jeffrey try to strangle her mother while using his legs to restrain Lisa in a chokehold.

Investigators with the Marion County Sheriff’s Department started investigating Lisa Jeffrey’s disappearance on November 27, 2018, after being contacted by Jamie Curl and Winifred Burke, Lisa’s aunt. Dep. Calvin Batts called Jeffrey on that day in a recorded interview prosecutors played for the jury. Batts pressed Jeffrey for information on Patience Burton, a woman the defendant described as his cousin who had a key to the camper. Burton unlocked the camper for law enforcement, leading them to find Lisa Jeffrey’s body in a storage cabinet under a bed in the spare bedroom. In his second police interview, Jeffrey insists Burton did not know Lisa’s body was in the camper and had nothing to do with her death.

The defense indicated they may call one witness — forensic pathologist Dr. William Anderson – in their case.

Closings are expected Thursday, regardless of when the court wraps up on Wednesday.