Broward County Judge Elizabeth Scherer had just started addressing the prospective jurors seated throughout her courtroom when suddenly, she paused.

It was hard to tell what exactly caught Scherer’s attention as she recited the instruction, which lawyers for defendant Nikolas Cruz had requested to identify anyone who could not presume the accused Parkland shooter innocent in the unrelated case for which he was now standing trial.

What happened next offered a clue.

Without saying a word, the woman stood up, wide-eyed and brows raised, and scurried out of the box. She did not cast a glance at the 23-year-old defendant as a uniformed deputy escorted her out of the courtroom. Cruz, seated next to his lawyers in a blue V-neck sweater and dress shirt, did not look at her. He continued staring down with his shoulders hunched over, a markedly different posture from the day before when he appeared engaged in the jury selection process unfolding before him.

Something had clearly affected him, too.

Maybe it was the reality of the circumstances starting to set in. It was day two of jury selection in Cruz’s battery trial for an altercation with a Broward County jail deputy in November 2018, nine months after his arrest for the shooting that killed 17 people at Marjory Stoneman Douglas High School in Parkland, Florida.

This was Cruz’s first encounter with members of the community who had been traumatized by the crimes he is accused of; people who unwittingly responded to a jury summons and suddenly found themselves in the same room as a man who many regard as a monster.

But, as Scherer once again reminded those in the courtroom, “this has nothing to do with the Parkland shooting case.”

Nevertheless, as Cruz’s lawyers inferred with their requested instruction, many prospective jurors had trouble separating the Parkland shooting from the battery case for which they had been called. This stage of jury selection, known as prequalification, is typically a dry affair when the court excuses people who can’t serve because of work, childcare, or ties to anyone involved in the trial.

Prospective jurors were brought into the courtroom in groups of 32 for questioning. After reading the special “this is not the Parkland shooting” instruction, Scherer asked if anyone could not presume Cruz innocent in this case because of the Parkland shooting. Of roughly 288 people questioned over two days, nearly half said they could not. On day one, two women left the courtroom in tears.

I live in Parkland, I have to see flowers in my neighborhood every morning…

By day two, whatever had rattled Cruz, his lawyers noticed it, too. They brought him colored pencils and a piece of drawing paper to help calm him down. This did not sit well with the prosecution or deputies assigned to supervise him, who said he could only use jail-issued pens.

“We’re objecting to that, your honor,” assistant state attorney Maria Schneider said after the prospective jurors left the courtroom. “We believe that that is something that they’re doing so the jury perceives that he’s a child and … his mentality is somehow challenged. We think that’s inappropriate, and we object.” 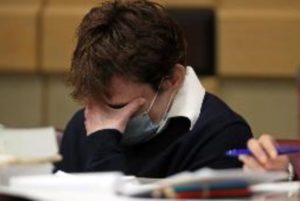 Cruz grew increasingly agitated to the point of tears as his lawyers came to his defense.

Trials by nature are adversarial, but the stakes in this case are unusually high for a battery trial. Cruz is charged with four felony counts, including battery and attempted aggravated battery, stemming from the clash with Sgt. Raymond Beltran that was caught on surveillance video. Such circumstances would normally be ripe for a plea deal, but not so here. If Cruz is found guilty, the convictions could be used as an aggravating factor in the state’s case for the death penalty.

Even Ermine’s participation in the trial came about through a set of hotly contested circumstances. He joined the defense team on the first day of jury selection after Cruz’s former lead attorney, David Wheeler, was sidelined by a serious injury. Broward County Public Defender Gordon Weekes – the elected official who leads the office –appeared in court on Monday to request a delay to give Wheeler time to recover and return to the case. Scherer denied the request, forcing Weekes to replace Wheeler with Ermine.

As a concession, Scherer set the next stage of jury selection for October 18 to give Ermine time to get up to speed. When jury selection resumes, the lawyers will have the chance to individually question the 109 prospective jurors who said they could presume Cruz innocent in his case. It remains to be seen how the intervening week affects their perspective.