WASHINGTON (AP) — The Justice Department said Tuesday it is curtailing federal agents’ use of “no-knock” warrants — which allow law enforcement agents to enter a home without announcing their presence — and would also prohibit its agents from using chokeholds in most circumstances.

The updated policy follows the March 2020 death of Breonna Taylor, who was shot and killed by police in her home during a no-knock warrant and whose death led to months of mass protests over racial injustice in policing and the treatment of Black people in the United States. 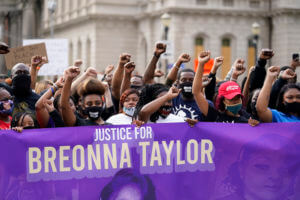 A no-knock warrant, as its name implies, is an order from a judge that allows police to enter a home without prior notification to the residents, such as ringing a doorbell or banging on the door. In most cases, the law requires that officers must knock and announce themselves before entering a private home to execute a search warrant.

But the Justice Department’s new policy, enacted by Deputy Attorney General Lisa Monaco on Tuesday, is more limiting than what is permitted by law. And obtaining such a warrant would require approval from both federal prosecutors and a supervisory law enforcement agent.

Under the updated policy, federal agents would be limited to using a no-knock warrant only in situations when an agent “has reasonable grounds to believe that knocking and announcing the agent’s presence would create an imminent threat of physical violence to the agent and/or another person.” There are limited exceptions to that rule, but agents seeking a warrant in those circumstances would need approval from the agency’s director and the U.S. attorney or an assistant attorney general before seeking the warrant from a judge.

There have been growing calls to ban no-knock warrants since Taylor, a 26-year-old emergency medical worker, was killed in her Louisville, Kentucky, home by officers. She was shot multiple times after being roused from her bed by police during a no-knock warrant as part of a drug investigation. No drugs were found, and the warrant was later found to be flawed.

Police generally seek a no-knock warrant if the situation might be extraordinarily dangerous or if a suspect is likely to destroy evidence when police knock on the door. But critics have said their use has increased dramatically in recent years and some departments use them routinely in cases that don’t merit such an exception.

“As members of federal law enforcement, we have a shared obligation to lead by example in a way that engenders the trust and confidence of the communities we serve,” Monaco said.

The Justice Department’s new policies also prohibit the use of chokeholds and “carotid restraints” unless the situation allows for the use of deadly force by police.

Several states have prohibited or severely limited the use of chokeholds and neck restraints by police officers since the death of George Floyd, who was seen on video pleading for air as a Minneapolis police officer pressed his knee into Floyd’s neck. The officer, Derek Chauvin, was convicted of murder and manslaughter in state court, and he and other officers also face federal criminal charges.