WASHINGTON (AP) — A Libyan intelligence official accused of making the bomb that brought down Pan Am Flight 103 over Lockerbie, Scotland, in 1988 in an international act of terrorism has been taken into U.S. custody and will face federal charges in Washington, the Justice Department said Sunday. 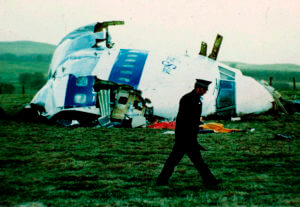 FILE – A police officer walks by the nose of Pan Am flight 103 in a field near the town of Lockerbie, Scotland where it lay after a bomb aboard exploded, killing a total of 270 people, Wednesday, Dec. 21, 1988. Authorities in Scotland on Sunday, Dec. 11, 2022 say the Libyan man suspected of making the bomb that destroyed a passenger plane over Lockerbie, Scotland, in 1988 is in U.S. custody. Scotland’s Crown Office and Procurator Fiscal Service said in a statement that the families of those who died had been told the news. (AP Photo/Martin Cleaver, File)

The arrest of Abu Agila Mohammad Mas’ud Kheir Al-Marimi is a milestone in the decades-old investigation into the attack that killed 259 people in the air and 11 on the ground. American authorities in December 2020 announced charges against Mas’ud, who was in Libyan custody at the time. Though he is the third Libyan intelligence official charged in the U.S. in connection with the attack, he would be the first to appear in an American courtroom for prosecution.

The New York-bound Pan Am flight exploded over Lockerbie less than an hour after takeoff from London on Dec. 21, 1988. Citizens from 21 different countries were killed. Among the 190 Americans on board were 35 Syracuse University students flying home for Christmas after a semester abroad.

The bombing laid bare the threat of international terrorism more than a decade before the Sept. 11 attacks. It produced global investigations and punishing sanctions while spurring demands for accountability from victims of those killed. The university’s current chancellor, Kent Syverud, said in a statement that the arrest was a significant development in the long process “to bring those responsible for this despicable act to justice.”

Stephanie Bernstein, a Maryland woman whose husband, Michael, was among the 270 victims — he was a Justice Department official returning on the flight from government business — said the news was “surreal” because there had been times in the past two years when victims’ families had been told that “it looks promising” only to find that was not the case.

“At first I thought I was dreaming when I was told what had happened, but it’s happened, and I’m incredibly grateful that this man will be tried in the United States,” Bernstein said in an interview.

The announcement of charges against Mas’ud on Dec. 21, 2020, came on the 32nd anniversary of the bombing and in the final days of the tenure of then-Attorney General William Barr, who in his first stint as attorney general in the early 1990s had announced criminal charges against two other Libyans intelligence officials.

The Libyan government initially balked at turning over the two men, Abdel Baset Ali al-Megrahi and Lamen Khalifa Fhimah, before ultimately surrendering them for prosecution before a panel of Scottish judges sitting in the Netherlands as part of a special arrangement.

The Justice Department said Mas’ud would appear soon in a federal court in Washington, where he faces two criminal counts related to the explosion. 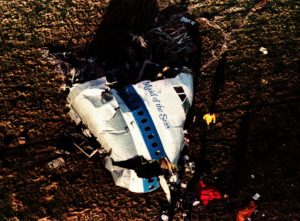 FILE Police and investigators look at what remains of the nose of Pan Am 103 in a field in Lockerbie, Scotland, in this Dec. 22, 1988 file photo. U.S. and Scottish authorities said Sunday, Dec. 11, 2022 that the Libyan man suspected of making the bomb that destroyed a passenger plane over Lockerbie, Scotland, in 1988 is in U.S. custody. (AP Photo/Martin Cleaver, File)

U.S. officials did not say how Mas’ud came to be taken into U.S. custody, but late last month, local Libyan media reported that Mas’ud had been kidnapped by armed men on Nov. 16 from his residence in Tripoli, the capital. That reporting cited a family statement that accused Tripoli authorities of being silent on the abduction.

In November 2021, Najla Mangoush, the foreign minister for the country’s Tripoli-based government, told the BBC in an interview that “we, as a government, are very open in terms of collaboration in this matter,” when asked whether an extradition was possible.

Torn by civil war since 2011, Libya is divided between rival governments in the east and west, each backed by international patrons and numerous armed militias on the ground. Militia groups have amassed great wealth and power from kidnappings and their involvement in Libya’s lucrative human trafficking trade

A breakthrough in the investigation came when U.S. officials in 2017 received a copy of an interview that Mas’ud, a longtime explosives expert for Libya’s intelligence service, had given to Libyan law enforcement in 2012 after being taken into custody following the collapse of the government of the country’s leader, Col. Moammar Gadhafi.

In that interview, U.S. officials said, Mas’ud admitted building the bomb in the Pan Am attack and working with two other conspirators to carry it out. He also said the operation was ordered by Libyan intelligence and that Gadhafi thanked him and other members of the team after the attack, according to an FBI affidavit filed in the case.

That affidavit said Mas’ud told Libyan law enforcement that he flew to Malta to meet al-Megrahi and Fhimah. He handed Fhimah a medium-sized Samsonite suitcase containing a bomb, having already been instructed to set the timer so that the device would explode exactly 11 hours later, according to the document. He then flew to Tripoli, the FBI said.

Al-Megrahi was convicted in the Netherlands while Fhimah was acquitted of all charges. Al-Megrahi was given a life sentence, but Scottish authorities released him on humanitarian grounds in 2009 after he was diagnosed with prostate cancer. He later died in Tripoli, still protesting his innocence.

In announcing charges against Mas’ud in 2020, Barr said the U.S. and Scotland would use “every feasible and appropriate means” to bring him to trial.

“At long last, this man responsible for killing Americans and many others will be subject to justice for his crimes,” Barr said at the time.

Scotland’s Crown Office and Procurator Fiscal Service on Sunday announced the arrest as well, saying in a statement that “the families of those killed in the Lockerbie bombing have been told that the suspect is in U.S. custody.”

The statement added that “Scottish prosecutors and police, working with U.K. government and U.S. colleagues, will continue to pursue this investigation, with the sole aim of bringing those who acted along with al-Megrahi to justice.” 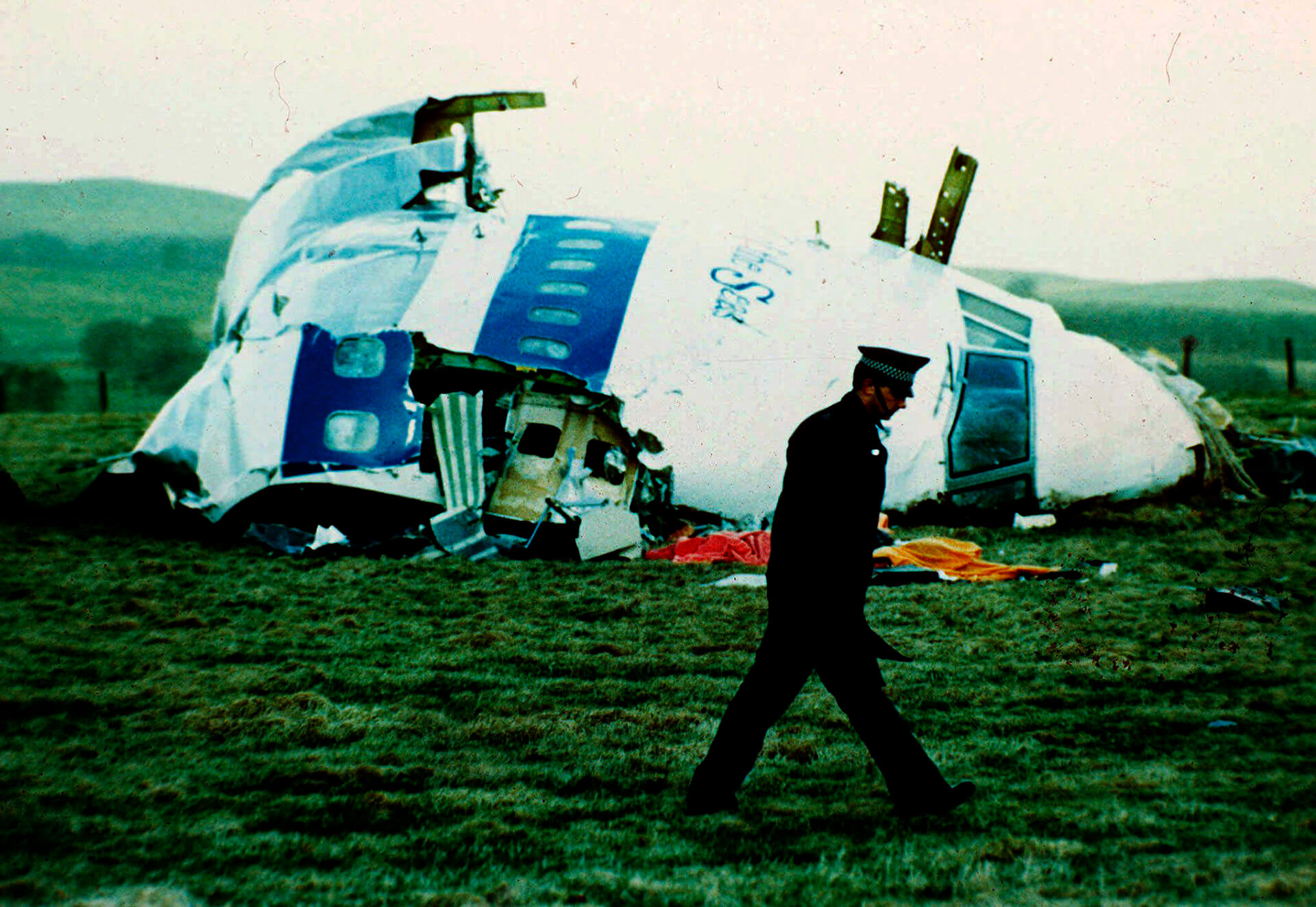 FILE - A police officer walks by the nose of Pan Am flight 103 in a field near the town of Lockerbie, Scotland where it lay after a bomb aboard exploded, killing a total of 270 people, Wednesday, Dec. 21, 1988. Authorities in Scotland on Sunday, Dec. 11, 2022 say the Libyan man suspected of making the bomb that destroyed a passenger plane over Lockerbie, Scotland, in 1988 is in U.S. custody. Scotland’s Crown Office and Procurator Fiscal Service said in a statement that the families of those who died had been told the news. (AP Photo/Martin Cleaver, File)
MORE NEWS