VALLEJO, Calif. (AP) — A man who sexually assaulted a Northern California woman who was kidnapped from her home in what police initially thought was a hoax was sentenced Friday to 31 years in state prison on Friday, prosecutors said.

Matthew Muller, who already is serving a 40-year sentence for federal crimes, was sentenced in Solano County Superior Court after pleading no contest to two counts of forcible rape of Denise Huskins, who was dragged from her Vallejo home in 2015, the county district attorney’s office said. 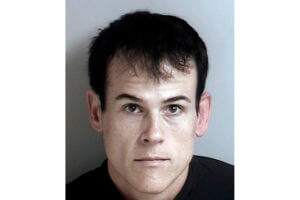 FILE – This June 2015, file booking photo provided by the Dublin, Calif., Police Department, shows Matthew Muller after he was arrested on robbery and assault charges. Authorities say Muller, who kidnapped and raped a Northern California woman in a crime so bizarre that police at first accused her of committing a hoax, has been sentenced to 31 years in state prison. (Dublin Police Department via AP, File)

Muller also pleaded guilty to robbery of an inhabited dwelling, residential burglary and false imprisonment, the District Attorney’s office said. His state sentence will be served concurrently with the federal sentence.

Muller, a Harvard-trained attorney and ex-Marine, concocted a plan so elaborate and bizarre that at first police accused the couple of lying, drawing national headlines.

Muller used a remote-controlled drone to spy on Huskins and Aaron Quinn before he broke into their San Francisco Bay Area home with a fake gun on March 23, 2015, tied up the couple and made them drink a sleep-inducing liquid, prosecutors said. They were blindfolded while Muller played a pre-recorded message that made it seem as if there was more than one kidnapper.

He put Huskins in the trunk of his car, drove her to his home in South Lake Tahoe and held her there for two days before driving her nearly 500 miles and releasing her in her hometown of Huntington Beach, near Los Angeles.

During and after the kidnapping, Muller used an anonymous email address to send messages to a San Francisco reporter claiming that Huskins was abducted by a team of elite criminals who were practicing their tactics.

After her release, Vallejo police called the kidnapping a hoax and erroneously likened it to the book and movie “Gone Girl,” in which a woman goes missing and then lies about being kidnapped when she reappears.

Investigators dropped that theory after Muller was arrested by police in Dublin, California, for a similar home invasion. Authorities said they found a cellphone that they traced to Muller and a subsequent search of a car and home turned up evidence, including a computer Muller stole from Quinn, linking the disbarred attorney to the abduction.

Investigators said they found videos of Muller arranging cameras in a bedroom and then recording himself twice sexually assaulting his blindfolded victim.

Vallejo police apologized for initially discounting the couple’s story. In 2018, Huskins and Quinn, who is now her husband, reached a $2.5 million settlement with the city.

Muller pleaded guilty to federal kidnapping charges and was sentenced in 2017 to 40 years in prison. His defense argued that Muller had spiraled into mental illness.

In court, Muller said he was “sick with shame” for the “pain and horror” he caused.

Huskins testified at his sentencing hearing about the “hell that we have survived” and told the court that she thought at the time she would be killed and still suffered from nightly nightmares.

State charges were filed against Muller in 2018. Muller pleaded not guilty to the charges. However, proceedings were put on hold last year when Muller was admitted to Napa State Hospital and ordered to take antipsychotic medication until he was declared mentally competent.