(WXYZ) — Ryan Kelley, a Republican candidate for Michigan governor, was arrested by the FBI at his home in West Michigan on Thursday morning.

The FBI also conducted a search warrant at the home, an FBI spokesperson confirmed to WXYZ.

According to a statement of facts from the FBI filed in federal court in Washington D.C., the arrest stems from Kelley’s alleged attendance at the Jan. 6 insurrection. 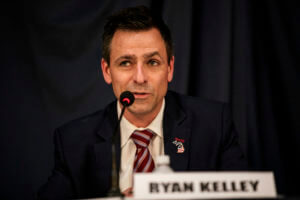 Ryan Kelley, a Republican gubernatorial candidate, speaks to conservative activists that are demanding another investigation into former President Donald Trump’s loss during a rally on Feb. 8, 2022 outside the Michigan Capitol in Lansing, Mich. Kelley, one of five Republican candidates for Michigan governor, was charged with a misdemeanor Thursday, June 9, 2022, for his role in the 2021 postelection riot at the U.S. Capitol. (Jake May/The Flint Journal via AP)

Kelley attended the Jan. 6 insurrection at the United States Capitol, and last year he told MLive he was there but did not go through barricades and left when things started getting crazy.

In the statement of facts, there are dozens of photos showing a man who the feds say is Kelley at the Capitol near a group that assaulted and pushed past law enforcement officers. In one photo, the feds say Kelley was taking a video in the crowd.

The feds also allege that Kelley climbed onto an architectural feature and around 2:05 p.m. on Jan. 6, the feds say he “used his hands to pull a covering off of a temporary structure that U.S. Capitol personnel had erected in support of a future planned event.”

He also recently skipped a Republican debate at the Mackinac Policy Conference over vaccine and testing requirements.

Kelley is a real estate broker who gained prominence in Republican circles during the COVID-19 pandemic for organizing a protest at the Michigan Capitol over the lockdowns.

Kelley is one of five Republicans left in the field after five other candidates were left off the August primary ballot due to invalid signatures.

This story was originally published June 9 by WXYZ in Detroit, an E.W. Scripps Company.