NEW YORK (AP) — The New York attorney general says her investigators have uncovered evidence that former President Donald Trump’s company used “fraudulent or misleading” valuations of its golf clubs, skyscrapers and other property to get loans and tax benefits.

In a court filing late Tuesday, lawyers for Attorney General Letitia James told a judge they have not decided whether to bring a lawsuit in connection with the allegations, but that investigators should be allowed to question Trump and his two eldest children under oath as part of the civil probe. 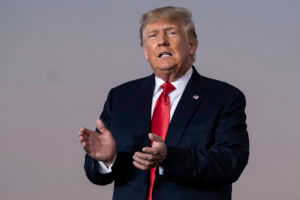 The court documents contain the attorney general’s most detailed accounting yet of a long-running investigation into allegations that Trump’s company exaggerated the value of its holdings to impress lenders or misstated what land was worth to slash its tax burden.

The Trump Organization, James’ office said, overstated the value of land donations made in New York and California on paperwork submitted to the IRS to justify several million dollars in tax deductions.

When giving estimates of Trump’s wealth, the company misreported the size of his Manhattan penthouse, saying it was nearly three times its actual size — a difference in value of about $200 million, James’ office said, citing deposition testimony from Trump’s longtime financial chief Allen Weisselberg, who was charged last year with tax fraud in a parallel criminal investigation.

James’ office detailed its findings in a court motion seeking to force Trump, his daughter Ivanka Trump and his son Donald Trump Jr. to comply with subpoenas seeking their testimony.

In its statement, the Trump Organization said “the only one misleading the public is Letitia James.”

“She defrauded New Yorkers by basing her entire candidacy on a promise to get Trump at all costs without having seen a shred of evidence and in violation of every conceivable ethical rule,” they wrote. “Three years later she is now faced with the stark reality that she has no case.”

Donald Trump Jr. said on Twitter that the investigation “is nothing more than political retribution from her on behalf of the entire Dem Party. She should be disbarred!”

The disclosure comes as Trump has been laying the groundwork for a potential comeback campaign for president in 2024. He held his first rally of the new year last weekend in Arizona, where he slammed the “monsters that are using law enforcement for political retribution at the local, state and federal level” and aired an anti-James video that highlighted her past anti-Trump statements.

Trump’s legal team has sought to block the subpoenas, and it asked a federal court last month to put an end to James’ investigation. That lawsuit is pending. His lawyers say James is improperly attempting to obtain testimony in her civil probe that could be used in a parallel criminal investigation overseen by Manhattan District Attorney Alvin Bragg.

In a statement late Tuesday, James’ office said the evidence gathered so far shows that her investigation should proceed unimpeded.

“For more than two years, the Trump Organization has used delay tactics and litigation in an attempt to thwart a legitimate investigation into its financial dealings,” James said. “Thus far in our investigation, we have uncovered significant evidence that suggests Donald J. Trump and the Trump Organization falsely and fraudulently valued multiple assets and misrepresented those values to financial institutions for economic benefit.”

Although James’ investigation is separate from the criminal investigation, her office has been involved in both, dispatching several lawyers to work side by side with prosecutors from the Manhattan D.A.’s office. 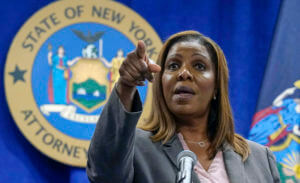 James’ office said that under state law, it can seek ”a broad range of remedies” against companies found to have committed commercial fraud, including revoking licenses to conduct business in the state, seeking the removal of company officers or seeking restitution and “disgorgement of ill-gotten gains.”

— Listed his Seven Springs estate north of New York City as being worth $291 million, based on a dubious assumption that it could reap $161 million from building nine luxury homes.

— Added a “brand premium” of 15% to 30% to the value of some properties because they carried the Trump name, despite financial statements explicitly stating they did not incorporate brand value.

— Inflated the value of a suburban New York golf club by millions of dollars by counting fees for memberships that were not sold or were never paid.

— Valued a Park Avenue condominium tower at $350 million, based on proceeds it could reap from unsold units, even though many of those apartments were likely to sell for less because they were covered by rent stabilization laws.

— Valued an apartment being rented to Ivanka Trump at as high as $25 million, even though she had an option to buy it for $8.5 million.

— Said in documents that its stake in an office building, 40 Wall Street, was worth $525 million to $602 million — two to three times the estimate made by appraisers working for the lender Capital One.

One judge previously sided with James on an earlier request to question another Trump son, Trump Organization executive Eric Trump, who ultimately sat for a deposition but declined to answer some questions.

Weisselberg pleaded not guilty to charges alleging he and the company evaded taxes on fringe benefits paid to executives.

The disclosures about the attorney general’s investigation came the same day as Trump ally Rudy Giuliani and other members of the legal team that sought to overturn the results of the 2020 presidential election were subpoenaed by a House committee investigating the U.S. Capitol insurrection.