DETROIT (AP) — The parents of a teenager charged with killing four students at a Michigan high school didn’t anticipate that he would commit violence and are “devastated” like others in the community, a lawyer said Wednesday in requesting that they be granted a lower bond.

James and Jennifer Crumbley are charged with involuntary manslaughter and have been jailed on $500,000 bond since their arrest on Dec. 4. They’re accused of making a gun accessible to Ethan Crumbley and failing to pull him out of school when summoned about his writings before the shooting on Nov. 30. 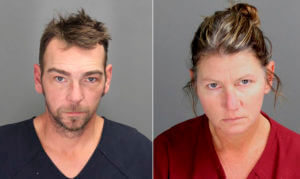 FILE – This undated combo of photos provided by the Oakland County Sheriff’s Office shows James Crumbley, left, and Jennifer Crumbley, the parents of Ethan Crumbley, a teen accused of killing four students in a shooting at Oxford High School, in Michigan. The Crumbleys are scheduled to return to court on charges of involuntary manslaughter for a probable cause conference in Rochester Hills District Court Tuesday, Dec. 14, 2021. (Oakland County Sheriff’s Office via AP, File)

Defense attorney Shannon Smith acknowledged that Jennifer Crumbley sent a text message to her son that day, telling him “don’t do it.” But Smith said it was a plea for him to not kill himself after the shooting at Oxford High School had already occurred and the gun was missing from home.

Ethan Crumbley, 15, is charged as an adult with murder and other crimes.

“The Crumbleys, like every parent and community member, are devastated by the school shooting,” Smith and co-counsel Mariell Lehman said in a court filing. “The last thing they expected was that a school shooting would take place, or that their son would be responsible.”

Smith asked that their bond be lowered to $100,000. She said they would wear an electronic monitor if released from jail.

Oakland County prosecutor Karen McDonald has said she would oppose a lower bond. The Crumbleys were arrested at a Detroit art studio, hours after charges were announced on Dec. 3 and they failed to appear in court.

Smith said they had planned to appear the next day at a different court handling Saturday arraignments and were not trying to flee.

“It is clear from the media appearances by Ms. McDonald that this case is one she takes very personally, was filed out of anger and filed in an effort to send a message to gun owners,” Smith said of the charges against the parents.

A judge is not expected to consider the new bond request until Jan. 7.