WASHINGTON (AP) — The Supreme Court on Tuesday limited the reach of a federal statute that requires stiff penalties for crimes involving a gun.

The 7-2 decision united both conservative and liberal justices, though one dissenting justice compared the result to “Alice in Wonderland.” The justices said the law can’t be used to lengthen the sentences of criminals convicted of a specific attempted robbery offense. 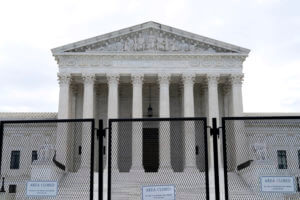 The case before the justices involved Justin Taylor, who in the early 2000s was a marijuana dealer in the area of Richmond, Virginia. The government has said he sold large quantities of marijuana to other dealers who distributed it. In 2003 he and another man planned to steal money from a buyer, and during the robbery the accomplice fatally shot the man.

Taylor was charged with “attempted Hobbs Act robbery,” a federal crime punishable by up to 20 years in prison. He was also charged under a federal statute that outlines mandatory minimum sentences for using a firearm in connection with a “crime of violence.” Taylor pleaded guilty to both and was given a 30-year sentence, 10 years longer than he could have received for just the robbery charge.

A majority of the court, however, ruled that attempted Hobbs Act robbery does not qualify as a crime of violence and therefore that Taylor was not eligible for the longer sentence.

“Simply put, no element of attempted Hobbs Act robbery requires proof that the defendant used, attempted to use, or threatened to use force,” Justice Neil Gorsuch wrote for a majority of the court.

The justices upheld a federal appeals court ruling that Taylor should be re-sentenced just on the attempted Hobbs Act robbery charge.

In a dissent, Justice Clarence Thomas cited Lewis Carroll’s “Alice in Wonderland” and “Through the Looking Glass.” He said the decision is an example of how the court’s approach to deciding these kinds of cases has led lower courts on a “journey Through the Looking Glass” during which the justices have found many “strange things.” He said that like Alice, the court has strayed far “down the rabbit hole.”

“I would hold Taylor accountable for what he actually did and uphold his conviction,” he wrote.

Justice Samuel Alito also dissented, agreeing that the court’s cases in this area of the law have “veered off into fantasy land.”

Frances Pratt, one of Taylor’s attorneys, said in an email that his attorneys are “gratified to know that the Supreme Court ruled for our client” and hope the decision will also help others. Taylor’s prosecution came at a time when officials in Virginia were attempting to reduce Richmond’s high homicide rate in part by taking a hard line on gun crimes, bringing those cases in federal as opposed to state court. The effort was called “Project Exile.”