CONCORD, N.H. (Court TV) — In 1991, 23-year-old Pamela Smart was convicted of being an accomplice to first-degree murder in her husband’s death. 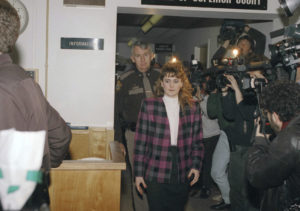 Pamela Smart comes into court at the Rockingham Superior Court House in Exeter, New Hampshire on Friday, March 22, 1991, where she was found guilty on all three charges related to her involvement in the murder of her husband Gregory Smart. Smart was convicted and sentenced to life in prison with no chance of parole. (AP Photo/Lisa Bul)

24-year-old Gregory Smart was shot to death on May 1, 1990, in the couple’s Derry, New Hampshire, home. Over the following months, Pamela, a local high school employee, portrayed herself as a devastated young widow searching for her husband’s killer. An investigation revealed Pamela had plotted Greg’s murder with four students, including 16-year-old Billy Flynn, with whom she was having an affair.

The salacious and notorious case was one of the first televised murder trials in U.S. history, and one of the first cases about a sexual relationship between a student and school employee. It was shrouded in what could only be described as a media frenzy.

Here’s a look at key players and moments from the trial that inspired a novel and movie, titled “To Die For.”

Billy Flynn, who shot and killed Gregory Smart, was sentenced to 40 years to life after pleading guilty to second-degree murder. At trial, Flynn testified Pamela told him she would lose everything if she divorced Greg and that she would break up with him if he didn’t kill her husband. Flynn was granted parole in 2015.

Teen co-conspirator Patrick Randall was sentenced to 40 years to life in prison on a charge of second-degree murder. At trial, Randall testified he held a knife to Greg’s throat as Billy shot him in the head. Randall was granted parole in 2005.

Teen co-conspirator Vance Lattime Jr. stole his father’s gun and then supplied the getaway car in Greg’s murder. He pleaded guilty to being an accomplice to second-degree murder and was sentenced to 18 years to life in prison. He was released on parole after 15 years. In 2023, a judge denied his request to end his parole supervision.

The defendant was 22 years old and employed as a high school media coordinator when she met a 15-year-old Billy Flynn and began an affair. At trial, she denied knowing about the plot to kill her husband. The jury convicted her of being an accomplice to first-degree murder, conspiracy to commit murder, and witness tampering.

She’s tried multiple times to have her life sentence reduced, and all were denied. Her next scheduled hearing is for Feb. 14, 2023, according to The Associated Press. While in prison, she’s reportedly earned two master’s degrees and was ordained as a minister.

Cecilia Pierce was 16 years old when she wore a wire and tapped the conversation that sealed the case on July 13, 1990. Pierce was a student intern and apparent confidant of Pamela. Prosecutors claimed she knew of the plot to kill Greg and police used her as an informant, secretly recording multiple conversations with Pamela. She never faced charges.