CONCORD, N.H. (AP) — A judge denied a request to end parole supervision for the getaway driver in the case of a former New Hampshire high school employee who was convicted of recruiting her teenage lover to kill her husband more than 30 years ago, according to an order released Wednesday.

Vance Lattime Jr. was 17 in 1990 when he supplied the car and his father’s gun, which was used to kill Pamela Smart’s husband, Gregory Smart, in Derry. The case inspired the 1992 novel and 1995 film “To Die For,” which starred Nicole Kidman and Joaquin Phoenix.

Lattime pleaded guilty to being an accomplice to second-degree murder. He served 15 years of an 18-year-to-life sentence, getting a three-year sentence reduction in 2005. He’s been on parole since then, without any violations, has married, and found steady employment, according to a motion filed by his lawyer.

“Lattime is truly repentant for his actions. In short, Lattime has been completely rehabilitated,” the motion states.

He asked the judge to suspend the maximum term of his sentence for five years due to good behavior. 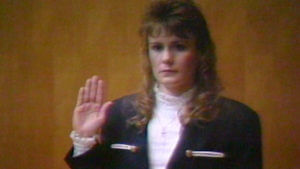 Prosecutors objected to his request. They noted that he is on the lowest form of parole supervision, only required to report one time a year.

The judge, who issued his order Tuesday, wrote, “Many times, a man must live with the direct consequences of his actions for the rest of his life, regardless of how much he improves his life. This is such a case.”

Pamela Smart was 22 and working as a high school media coordinator when she began an affair with William Flynn, the 15-year-old student who shot and killed Gregory Smart. Although she denied knowledge of the plot, she was convicted of conspiracy to commit murder and other crimes and sentenced to life without parole. Flynn, Lattime and two other teens cooperated with prosecutors, served shorter sentences and have been released.

Pamela Smart’s lawyer is asking New Hampshire’s highest court to order a state council to hold a hearing on her request to reduce her sentence. Oral arguments are scheduled for Feb. 14.

Her trial was a media circus and one of the first high-profile cases about a sexual affair between a school staff member and a student.